Over the weekend, Anderson County, in partnership with Grady’s Great Outdoors, sponsored a 48-mile challenge paddle trip on the Saluda River. Organizers called it the ‘Fall Forty-Eight’. During the 2 ½ day course, representatives from Anderson County, Northbrook Carolina Hydro, Save Our Saluda and area residents explored the waterway through 5 of the 6 Upstate counties bounded by the Saluda River and portage around 6 historic dam sites.

“For far too long the Saluda River has been a diamond in the rough,” said Anderson County Council District Six representative Ken Waters. “A significant effort is being made by Anderson County to coordinate formal access improvements along 48-miles of the 128 mile Saluda River Corridor that flow through Upstate South Carolina Counties. In a few short years, we’ve come a long way toward unlocking the potential of the Saluda,” Waters said. “The Fall Forty-Eight offers an opportunity for enthusiastic proponents of the Saluda River Corridor development to paddle the length of the 48-mile improvement area, document the journey and generate recommendations for formal access points, as well as phasing for the project. This is the perfect chance to showcase a rare ‘viewshed’ of Abbeville, Anderson, Greenville, Pickens, and Laurens Counties and our historic dams, while promoting river recreation, and increasing awareness of this ‘paddle-friendly’ river.”

“Grady’s Great Outdoors is honored to continue our partnership with Anderson County to promote awareness of the Saluda River as a paddle sports corridor,” said Grady’s Great Outdoors owner John Phillips. “Hundreds of area residents have discovered the enjoyment of paddle sports and Grady’s is happy to do anything possible to expose more people to the sport. Participants in this event will have the opportunity to paddle the new Old Town Tetra kayak as well as the high performance Necky Rip kayak, both provided by Grady’s. They also provided transport to and from the launch and take-out.

The 48-mile corridor is bordered by the Saluda Lake Dam and the Ware Shoals Dam. Laurens and Greenwood counties are currently implementing access and portage points along their shorelines. Once completed, these two corridors will collectively offer 81 miles for paddling recreation in the upstate, leaving 47 miles of headwaters to formally address. Save our Saluda has diligently worked to champion access on the Saluda River in this northern Upstate region and is hopeful that the current multi-county effort will aid in their success. 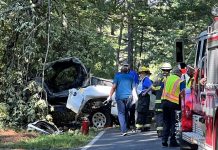