As the South Carolina Department of Transportation, the Anderson County Bridges and Roads Department, the Powdersville Water District and Powdersville residents continue to define the vision for the Highway 153 corridor, several ideas are emerging.

At a public information meeting held on October 27 at the Powdersville Library, the discussion centered on restricted turning access on some stretches of the highway; while also exploring the use of frontage roads and other access devices to provide easier access between businesses, while removing some of the traffic load from Highway 153.

Holt Hopkins, of the Anderson County roads and bridges department, cites the cooperation of the various elements in helping reach some valid goals. “The SCDOT has been an integral part of this process, with Kevin McLaughlin really helping to make things happen. The Powdersville Water District really took the reins and moved things along, especially when we were in the first days of getting organized. The County, with Judy Shelato and others helping, have put some presentations and ideas together, and the public has been very helpful in staying involved in the process.”

Part of that involvement included meetings with various developers and business owners to discuss options for access to residential and commercial areas that would lessen the load on the main highway. “We hope to talk to every developer and businessman in the corridor, and ask them to work with us on developing these alternatives to the current traffic patterns.”

Hopkins added that public input and concerns have already had an impact. “At the intersection of Rowe Road and Three Bridges Road, there was a demand for a stop light, but until the public really got involved and convinced SCDOT to revisit the latest crash data at that site, it was dragging along. Now DOT has agreed to put one in in the near future.”

According to Hopkins, another example is the intersection of Rowe Road and Hood Road just below the new high school. DOT had delayed the study until the new school opened to have the latest information. “As a result, a four way stop was put in there last week. It just shows that people can have an impact, and that agencies can act in response to those needs,” Hopkins said. “The next public meeting is scheduled for February, and we are seeking input on a project that will utilize $200,000 in grant money which is expected in 2015, the uses of that money are fairly restricted in scope, and we hope to develop a project that will meet the criteria.” 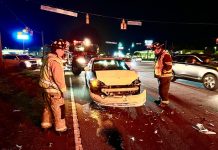