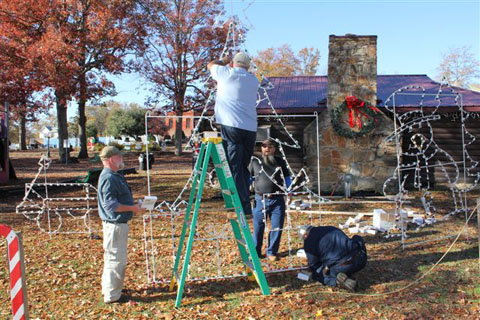 The Town of Williamston, the Greater Williamston Business Association, the Springwater Committee and local businesses continue to invest in new holiday decorations for the town and park for the 2011 holiday season.

Several new displays were purchased by the Springwater Committee including a five part train display, four deer, a big snowman and a 12 ft. Christmas tree with two toys.

Proceeds from the Spring Water Festival and pictures made in the Scout Hut were used to purchase the new decorations.

Returning will be the Ace Hardware 12 ft. x 12 ft. Candy Cane Arch which has been upgraded with new LED lights, and a display by Upstate Newton Real Estate will return.

The park’s center stage features a giant decorated wreath which has become a favorite place for photographs.

The new pole decorations feature sixteen Christmas Trees, Stockings and Candles which will be placed on poles along Main St., East Main and Greenville Drive.

They replaced the Angels which graced the town for more than 15 years. Eight of the Angel decorations were retained and are still used in the park.

Last year the Town also purchased a 25 foot “dancing tree” which is placed in front of the Municipal Center. The LED lights on the tree are coordinated to music and appear to be dancing. The wooden boxes that have been used with the town’s tree in the past will be used as part of the decoration.

The holiday light upgrade included 100 new lighted snowflakes which are strung throughout the park. The snowflake decorations are assorted sizes from 1 foot to 5 feet.

The total purchase price for the town’s new decorations, including the tree and snowflakes was $30,308. The decorations were purchased from Winterland Inc in Cicero Indiana and were paid from the town’s hospitality tax fund.

The new decorations are the first for the town in 20 yesrs.

The lighting of the park has been possible with the help of volunteers, especially Dianne Lollis, who helps coordinate the event along with the town crews all working together to make it happen.

The Greater Williamston Business Association (GWBA) will upgrade their display which features four dancing Christmas Trees which are animated to recorded music. The display has ten favorite holiday songs with the lighted trees moving to the music. The display was purchased last year on a two year lease for $3,500 each year.

The Williamston Municipal Center is hosting Deck the Halls, daily from 9 a.m. to 9 p.m. The annual tree display features more than 30 decorated Christmas trees. The Town of Williamston is also bringing Santa to the Scout Hut.

During the month of December, there will be horse drawn carriage rides, special entertainment, hot drinks and cookies and visits with Santa in the Scout Hut.