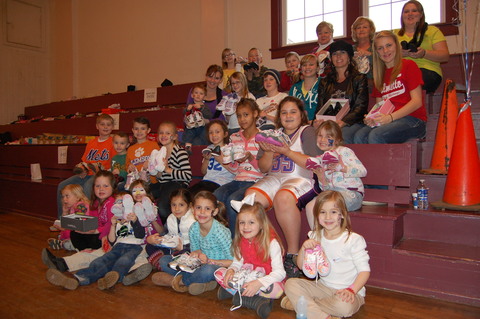 For Alaina Dawson’s 10th birthday, she wanted to have a party where instead of receiving presents from family and friends, she wanted shoes for less fortunate children and orphans.

Saturday at the Williamston Municipal Center Alaina and friends enjoyed a fun birthday party with cake, candy, food and games.

One whole side of the gym was lined with shoes brought by those attending the party and others who just stopped by to drop off.

“I am very thankful. It is just overwhelming,” Alaina’s mom, Jessica Dawson said about the support her daughter has received from the community.

Alaina said about 18 of her friends attended the party which she described as “pretty big.”

She said she wanted her friends to enjoy it and have a lot of fun.

And apparently there were, as several fun stations were set up including putt-putt, ring toss, corn hoe, duck pickup and more.

In addition to popcorn and snowcones made on machines at the party, those attending also enjoyed cake, candy, and food.

There were also flowers and gift bags, cupcakes and cookies from Whole Foods of Greenville and Bi-Lo of Pelzer. Sam’s Club donated a gift card.

Alaina said she was pretty sure she would reach her goal of 1000 pairs of shoes.

Throughout the day, people from the community dropped in with shoes in hand, bags, and boxes to help support Alaina’s cause.

When the birthday party ended and they did a final count, Alaina had collected 671 pairs of shoes to help the needy children in this area and throughout Anderson County.

In addition to the shoes donated locally, a nationally known shoe company is sending 100 pairs.

Alaina said she was pleased with the support for her project.

“I am very grateful that they came,” Alaina said. “For all the support and help.”

Alaina’s best friend, Alaina Williams, said that she “thought that it is wonderful that Alaina is getting shoe’s instead of presents” and “that Alaina is always kind to others.”

Jessica Dawson said she wanted to thank everyone who helped with the project.

“Thank you and God bless,” she said. “God has really blessed us. It means a lot to be a community like this, for them to support a 10 year old in a project like this.”

Alaina is the daughter of Alan and Jessica Dawson. She has a two year old brother Jalan and six year old sister, Gracie who both attended the party.