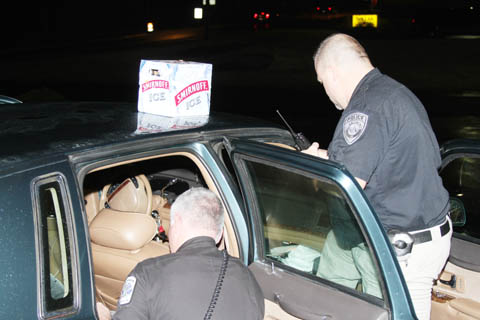 West Pelzer Police Chief Mike Clardy (right) along with an Anderson County deputy search a car Wednesday night following a traffic stop. A West Pelzer officer stopped the car at the intersection of Highways 20 and 8 for apparently driving with no lights on. The driver of the car, Stephen Xavier Williams, was detained for questioning. As the officer questioned a 16-year-old female juvenile passenger, the driver, in handcuffs, fled on foot. A foot chase ensued for the 19 year old suspect but he eluded officers behind a dentist office on Highway 20. A manhunt began and West Pelzer was assisted by sheriffs deputies, canine units, along with Williamston officers. Officer found beer and paraphernalia inside the car. Authorities set up a perimeter along Highway 20 and Depot Road while officers and dogs combed the area. Through persistend leads and communication by phone, the driver turned himself in to Chief Clardy on Friday and will face multiple charges.