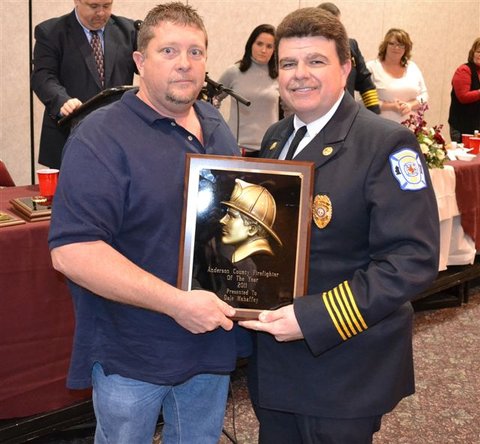 According to Blackwell, even while not serving as an officer, Mahaffey responded to more than 90 percent of the department calls.

“When he isn’t an officer he simply can’t be beaten out of Firefighter of the Year at West Pelzer,” Blackwell said. “He is the most dedicated and valuable person we have.”

Fellow firefighter Chase Maddox was awarded the Courage and Life Saving Award for his efforts at the scene of an accident in which he took a lifesaving action to keep a fellow firefighter from being struck by a vehicle driven by a drunk driver.

According to the information submitted by Blackwell for consideration of the award, Maddox responded to a motor vehicle accident on Nov. 4, 2011 involving an overturned gas tanker at the intersection of US Hwy. 29 and Ballard Road.

Due to the response of Med Trans Air Ambulance and the dangers of the gasoline on the roadway, Hwy. 29 had to be shut down quickly. Even with the assistance of the SC Highway Patrol, and the Sheriff’s Office traffic was still getting through to the accident scene.

Later in the evening while assisting with traffic control at the intersection of Hwy. 8 and Hwy. 29, a drunk driver went through the SCHP barricade and was headed straight for fellow firefighter Kevin Burgess. Maddox saw the vehicle and allerted Burgess to run and get out of the way. The drunk driver hit West Pelzer Fire Engine E6-1 in the very same spot Burgess had been standing.

The lifesaving action by Maddox avoided what could have been a fatal injury for his fellow firefighter, Blackwell said.

Members of the West Pelzer Fire Department accepted the award for Maddox, who could not attend the banquet.