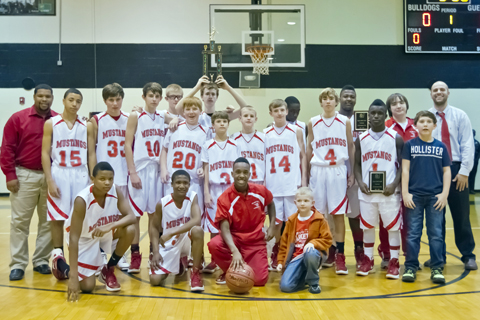 The Palmetto Middle School boys basketball team put the finishing touches on a perfect season by winning last weekend’s Skyline Middle School Conference Tournament. First-year coaches Will Clarke and Terrance Wilson saw their C-Team Mustangs post a 12-0 record to win the S.M.S.C. regular season title, then take both of their postseason games to bring home the tournament trophy and a perfect overall record of 14-0.

The Lady Mustangs narrowly missed advancing to the tournament’s Championship Finals, as they completed a 7-7 overall season under rookie coaches Monica Haley and Meagan Pack.

This is believed to be the first time in the middle school program’s 40-year history that the boys have gone unbeaten, and won the conference regular season and tournament championships in the same season.

The Mustangs earned a first-round bye in the tournament as the top-seeded team after sweeping all six of their fellow conference foes to win the regular season title.

They then made rather quick work of semi-final challenger Starr-Iva, as they held the Cubs without a field goal for over six minutes on their way to a 37-20 victory.

Tyson Beaty fired in 11 points to highlight the scoring for Palmetto, while Luke Cothran hauled down eight rebounds and Matt Bolt grabbed seven more to lead the effort on the boards.

Facing host school Riverside of Pendleton in the Championship Finals, the Mustangs came out fired up and ready to take care of business.

With their fans filling almost two-thirds of the stands, the Palmetto boys gave them plenty to cheer about right from the start, as they ran out to a dazzling 12-0 lead over the Bulldogs.

They kept Riverside off the scoreboard for the first 4:36, and led 14-2 at the end of that dominating first quarter.

The Bulldogs gave a more competitive showing the rest of the way, however, as they were looking to avenge their 48-44 and 38-24 regular season losses to the Mustangs.

They bettered Palmetto by a point in the second quarter, but still trailed at halftime by the margin of 20-9.

Things got much more tense in the third quarter, as Riverside turned up the heat with a 14-6 run that made it a 26-23 game going into the last six minutes.

The Mustang fans then turned up the volume on their cheering, and the boys fed off that rousing support to put together a decisive charge.

Bryson Jackson sunk a pair of free throws, then Grant Houston converted a three-point play and followed with a three-point basket to spark an 8-2 outburst that allowed the Mustangs to go up by 10, at 37-27, with just under three minutes remaining.

The Palmetto boys led by at least six points the rest of the way, as they took the win, 42-35, and brought home their coveted trophy.

Tyson Beaty did much of his scoring off of seven steals, and finished with some 15 points, while Grant Houston also tallied double-digit numbers with 11 points.

Bryson Jackson tossed in eight points, Antwuan Thurmon netted four, and Luke Cothran and Aaron Wimpey each had two more to round out the scoring.

Luke Cothran powered his way inside for 10 rebounds, and Bryson Jackson muscled his way through traffic for seven more.

The Lady Mustangs saw their outstanding season come to a close with a heartbreaking 45-40 loss to unbeaten regular season and tournament champion West-Oak in the Semi-Finals.

Palmetto jumped out to a quick 9-3 lead, only to see the Lady Warriors reel off 18 unanswered points to go up, 21-9.

The local ladies refused to throw in the towel and rallied back to make a game of it right down to the final seconds, as they stayed within single digits of West-Oak for the entire second half.

Jamie Clatt battled her way to seven rebounds, while Elizabeth Wallace worked the boards for six and Chandler Thompson came away with five more, against the taller and highly-aggressive Lady Warriors.