Former Wren High Administrator Dr. Kelly Pew has been named the new superintendent for the School District of Pickens County. During a their meeting Monday, the school board unanimously approved Dr. Pew to replace Dr. Henry Hunt, who is retiring at the end of June.

After graduating Clemson University in 1991, Pew began her career as a teacher at Chapman High School in Inman. She also taught at McDuffie and T.L. Hanna high schools in Anderson until she became a school administrator 1997. She served as principal at Seneca High School, Seneca Middle School and Wren High School’s Freshman Academy. She also worked as an assistant principal at Wren High, at Bryson Middle School in Greenville, and at the South Carolina Governor’s School for the Arts Summer Program.

Pew has also been an adjunct professor at Southern Wesleyan University since 2003, teaching graduate courses in curriculum, instruction and school leadership. She also teaches in the master of education program at Anderson University.

She earned a master’s degree from Furman University in 1997 and earned a doctor of philosophy degree in educational leadership and superintendent’s certification from Clemson University in 2002.

Pew said, “I appreciate the board’s confidence in me as the school district’s new leader. I have thoroughly enjoyed working with our students, teachers, support staff and administrators over the last three-and-a-half years, and am excited to continue in a different role. Both my mother and grandmother are Easley High School graduates, so I have a true connection to Pickens County.”

“Over the next few months, I will be working with board members to develop specific goals for the district for the 2012-2013 school year,” she said. “I will be listening carefully as the principals and I look together toward the future of our district. I also look forward to working with Dr. Hunt and continuing to benefit from his experience during the transition.” 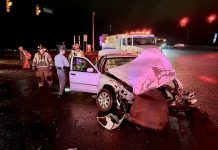