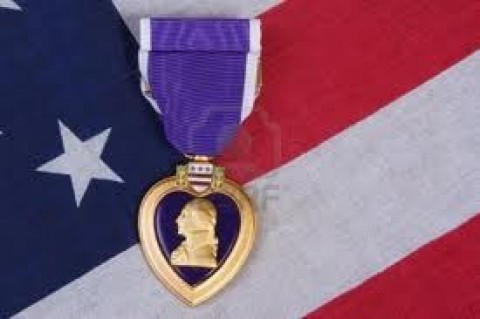 By Stan Welch
A young Marine from Williamston was awarded the Purple Heart for wounds suffered last August 18, in the Marjah District of the Helmund Province of Afghanistan.

Charles Thorp, a 2009 graduate of Palmetto High School, was driving a USMC HumVee when an improvised explosive device (IED) exploded near the vehicle. Two other Marines were unharmed, but Thorp suffered a loss of consciousness and a concussion.

He was transported to Bastion British Military Hospital, where he spent ten days before returning to active duty with his unit, the First Battalion of the Sixth Marines, who have since returned Stateside and are currently stationed at Camp LeJeune, NC. Thorp was promoted from private first class to lance corporal and hopes to be a full corporal by the next deployment.

Thorp’s father, Ken Thorp, and his mother Leah, were informed of their son’s injuries and basic condition on the very same day that they occurred. “That was a tremendous comfort to us all to know that while Charles was injured, the injuries were not life threatening,” said Ken, who served in the USAF.

In fact the whole family has a military tradition. His sister served a tour of duty in the Army, also in Afghanistan in Kabul. She suffered a broken ankle while scrambling to escape an out of control truck in the compound. “She actually got hurt worse than her brother,” laughed Ken.

Both of Charles Thorp’s grandfathers served as well. His maternal grandfather, Bob Lanier, was in the Air Force, while his grandfather Charles Thorp also won the Purple Heart and the Bronze Star, the nation’s third highest medal for valor in combat. He served in the U.S. Army in both Korea and Viet Nam. He is deceased.

Charles married his high school sweetheart, Ally Roper Thorp. They met while attending Palmetto High School, though she would go on to graduate from Wren High School. He was on the PHS soccer team, a sport his father says he loves. “The Journal has had his picture on the sports page several times,” he said.

Charles worked at the Cushman Plant in Williamston before enlisting in the Marine Corps in 2010.