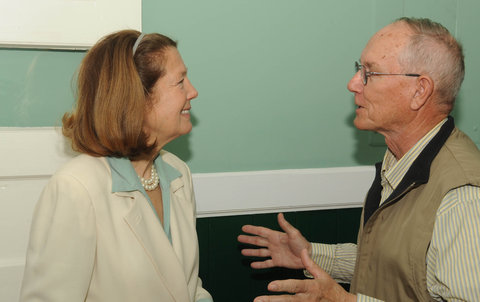 Wilson said she was overwhelmed by the response from the community.

“I couldn’t believe it,” she said. “I am so honored to be a part of such a special county.”

Those attending the reception, which was held at the Williamston Municipal Center, enjoyed refreshments including light finger foods, punch and a chocolate fountain.

Wilson was elected to serve a new Council District that came into being in 2000, following a 1998 referendum which increased Anderson County’s five districts to seven.

She has since served 12 years representing Williamston and surrounding area in the District which now stretches to Honea Path.

In 2002, following the 2000 U.S. Census, the council district lines were redrawn and Wilson found herself gerrymandered into a tough election. “I had the entire White Plains precinct the first year I ran, and it was my strongest box. In 2002, the lines were drawn to cut a lot of that box out, as well as moving Belton to District Three, she said.

Wilson won that race by seven votes. Since then she has consistently built the margin of her victories to the thirty point range.

Under a new redistricting plan recently approved by the Department of Justice, Wilson will regain part of the White Plains precinct which has been a part of District Six.

District Six includes a portion of Piedmont and Powdersville and has seen continueing growth.

One after another including county and local elected officials, firefighters and residents, Wilson was greeted and thanked for her service.

Wilson has many family ties to the Williamston area. Her mother went to school in the building that now serves as the town’s municipal center, while her dad worked at the Cushman plant for a number of years.

“This area is so special to us,” said Wilson.