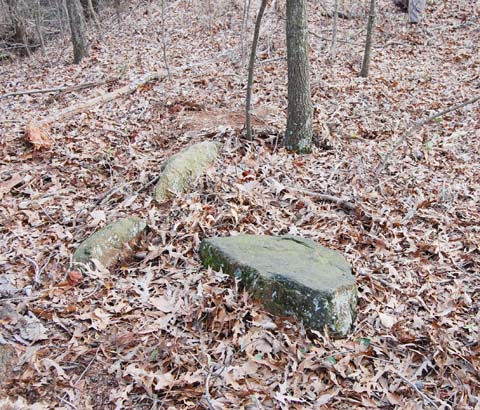 An effort is underway to find the burial site of Caesar, a negro preacher who is said to have had considerable influence in the area during the 1800s. The stones pictured left could possibly be the markers for his grave.
Local community activist and volunteer Dianne Lollis, along with Barbara Davis, began a search for the man about three years ago as they became interested while members of the Williamston Area Historic Commission.
Larry Strom, Marion Middleton, Jr. and others have joined in the effort to locate the burial site which is thought to be somewhere behind the Williamston Municiapal Center, possibly near the ballfields and the old railway bed.
So far, this is what they know:
“Some of our older citizens tell us that Caesar preached well. He was a slave, but saved all the money he could get and bought his freedom for either $l00 or $500,” according to Lollis.
Lollis said he later bought the freedom of his brother. The land just above Rush and Vandivcr’s planing mill, on each side of the railroad, was once owned by Caesar. He was buried in the field in the rear of the Williamson Female College.
Some of the records in regard to Caesar may be of interest.
An article from the Anderson Intelligencer, a newspaper serving the area in the late 1800s and published August 24, 1898 states: ‘’Brother Caesar made application to the church for permission to go to Brother E. River’s to hold meeting and exercise his gift, but it was denied him for some reasons.” Caesar was “excluded from fellowship for persisting over the head of the Church in taking another wife.” A little later he was restored to fellowship. “We allow Brother Caesar to use his gift where he is called or as far as his master will allow him to go for one year, provided he preaches sound doctrine.” “After worship by Brother Caesar, a few members met in peace, and, as there was nothing before the Church, we spent the day in religious conversation.” “Caesar applied for a permit to travel into the State of Georgia and exercise his gift. Brother Holland was appointed to write his permit.” “The peace of the Church was inquired for. Brother Caesar came forward to give satisfaction for knocking down his fellow servant with an ax for which he was excluded. After four months Caesar was restored, and a little later “a motion was made by Brother John Gambrell for Brother Caesar to exercise his gift in preaching and exhortation, and the Church tolerated him to do so within the bounds of sister Churches.”
“Took up a report concerning a black man of Mr. Maxwell’s, and Brother Caesar agreed to labor with him and report next meeting.” The Church tried to settle difficulties between master and slave. At no less than thirteen different meetings a disturbance between a mistress and a slave was brought up, but it was found very hard to arrange the matter satisfactorily. Finally a committee that was appointed to consider the matter reported “that they could not decide, and they requested the liberty to send for help.” Accordingly, members from Neal’s Creek, Dorchester, Shady Grove and Washington met to try to settle the difficulty.”
In the above article it states Caesar was buried behind the Williamston Female College.
“That would fit the location we found,” said Lollis, who along with Middleton, Strom, David Meade of The Journal and help from Gray Mortuary found a site that could possibly be the gravesite of Ceasar.
Members of the group are also contacting a historical group in Columbia that could possibly help with the search or in confirming information.
According to Lollis, The Town of Williamston is very interested in this and Mayor Carthel Crout has authorized her to gather information about locating and preserving the site which could be a slave, freedman cemetery of historical significance for the area.
Lollis is in the process of gathering additional information about him and asks anyone who may have information to contact her at 864-847-5743 or by email at missetta@charter.net.