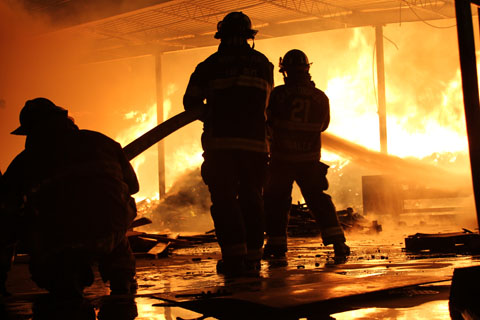 Firefighters from more than five fire departments battled a blaze overnight that engulfed a Pelzer warehouse filled with pallets.

Officials said the warehouse had extremely dry pallets stacked ten to twelve feet high which contributed to the massive blaze. The building was one of the old Pelzer mill warehouse buildings that were left standing after the mill was demolished.

The mill was torn down several years ago after a company purchased it to salvage brick and timber for resale.

Firefighters have responded to several fires in the area over the last few years and a number of Pelzer residents had complained that the warehouse and pallets were a potential fire hazard.

Some area residents voluntarily evacuated the area as a safety precaution while firefighters worked overnight to keep the fire under control.

Firefighters from West Pelzer, Whitefield, Wren, Williamston, South Greenville and other departments responded to assist with the massive fire. Pelzer EMS also stood by the scene as firefighters battled the blaze for several hours.