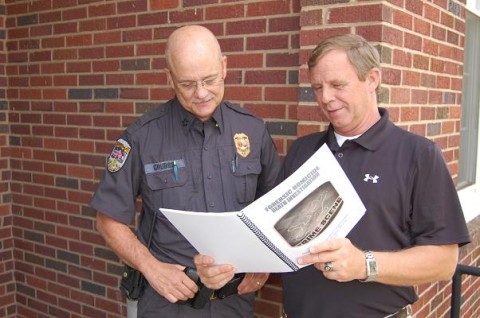 The Williamston Police Department is hosting a Forensic Homicide Death Investigation class for officers from across the upstate this week. The 40 hour class, the only one of its kind being offered in the state, is approved through the State Criminal Justice Academy.

Williamston Police Chief Jay Grubbs and Sgt. Jesse Harris look over the Forensic Homicide Death Investigation workbook being used for a weeklong training class being held at the Municipal Center this week. Harris helped develop the materials used in the class workbook.

Williamston Police Sgt. Jesse Harris developed the program in 2000 and recently had it re approved to offer the training to officers working or possibly assigned to a homicide investigation.

Thirteen law enforcement officers from agencies across the upstate are participating in the week long training class.

It involves details of identifying the different stage of decomposition and skeletalization of a deceased person.

Officers are trained in what to look for when their investigation includes injuries, gunshot wounds, strangulation, gunshot wounds deaths involving vehicle crashes.

It goes into types of murders including serial, organized or disorganized and domestic.

Harris said they cover a bit of everything so that investigators have information on which to base their findings.

Williamston Police Chief Jay Grubbs said the couse provides superior instruction and knowledge for investigating crime scenes and is a “collaborative with other agencies.”

He said the department has its own firearms instruction and has offered a constable class and plans to offer other in-house training for Williamston officers and others when possible.