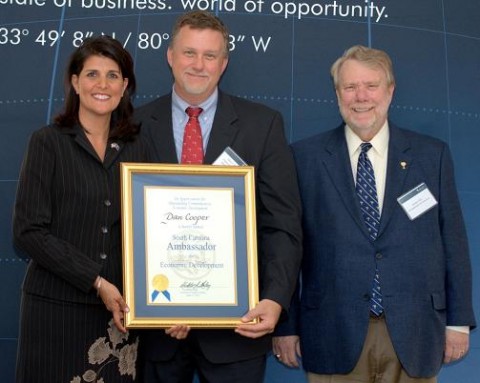 Dan Cooper, of Parker Poe Consulting was recently honored by Gov. Nikki Haley and Secretary of Commerce, Bobby Hitt for being a strong leader in recruitment of industry in Anderson County. He has been an advocate for the existing industries and worked tirelessly to improve the county’s assets, state officials said. Cooper has assisted businesses and organizations in a number of education, infrastructure and workforce needs.

Piedmont’s Dan Cooper was among a select group of economic development leaders recently honored by Governor Nikki Haley and the South Carolina Department of Commerce. Cooper and the others were recognized as South Carolina Ambassadors for Economic Development as part of Industry Appreciation Week. The awards ceremony recognized 51 individuals from all 46 counties who contributed to economic development in their local communities.

The awards ceremony was held April 17 at the Statehouse. Industry Appreciation Week provides an opportunity to say “thank you” to companies in the state for their many contributions to our communities, as well as a chance to build awareness among the residents of South Carolina that existing business is a fundamental driver of both the local and state economy.

House Speaker Bobby Harrell said in a statement, “Economic Development starts first and foremost on the ground level. Today, we recognized some outstanding Palmetto State business leaders as Ambassadors for Economic Development because of their hard work to advance the unified economic goals we share for South Carolina. The most valuable economic development resource our state has are those businesses that operate and succeed in the private sector every day.”

During the past year, South Carolina also continued to add to its list of marquee companies with expansions and investments from companies such as Bridgestone, Continental Tire, Michelin, Nephron Pharmaceuticals, TD Bank, ZF Group and many more.

The ambassador awards presentation is one of many events that will occur across the state as part of Industry Appreciation Week. Local communities will also host a variety of activities to recognize and thank business and industry leaders.