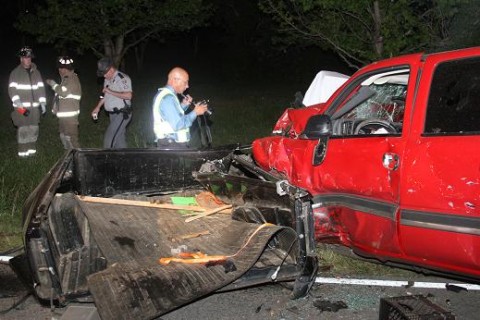 Anderson County Deputy Coroner Don McCown works an accident scene where a father and daughter were killed Friday night. The father was driving west on Highway 8/81 when he apparently crossed the center line and was struck by another vehicle.

Nicholas Morra Jr., 42, of Piedmont and his 14 year old daughter, Nikki Marie Morra were pronounced dead at the scene according to the Anderson County Coroner’s office. McCown said the father and daughter were not wearing their seat belts and speed appeared to be a factor in the accident. They were only about two miles away from their home. Nikki was an eighth-grader at Wren Middle School.

Jane Harrison, Spokesperson for Anderson One, said, “We will have trained counselors available at Wren Middle for all faculty, staff and students on Monday.”

Dr. Wayne Fowler, Anderson One Superintendent, said, “The family and friends of Nikki are in our thoughts and prayers. This tragedy has touched many lives in our district and we are deeply saddened.”

The driver of the other vehicle was flown to Greenville Memorial hospital. Pelzer EMS, Three and Twenty firefighters and SC State troopers worked the scene. (Photo by David Rogers)