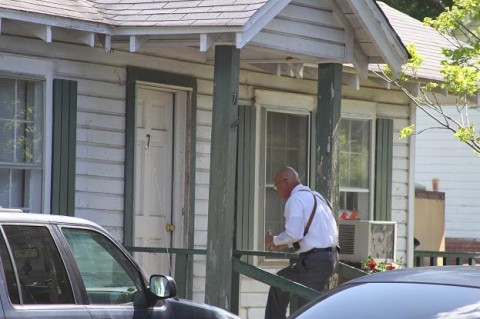 Anderson County Deputy Coroner Don McCown enters the house at 7 Ellison Street in Williamston Tuesday. Officials are investigating the death of a six- month- old female child at the home.

The Williamston Police Department and Anderson County Coroners office are investigating the death of a six month old female child, possibly occurring as the result of positional asphyxia.

Capt. Erik Russell, of the WPD, is directing the investigation. He said officers received the call at approximately noon Tuesday.

“We had personnel on the scene within two minutes. EMS personnel also responded rapidly and transported the child to Greenville Memorial Hospital, where she was declared dead,” Capt. Russell said.

Russell said Deputy Coroner Don McCown was on the scene as well and an autopsy and toxicology test would be done Wednesday morning at AnMed.

Both parents were at the home, located at 7 Ellison Street, when police arrived. The incident is being investigated as suspicious, said Russell.

As of Tuesday evening, no official cause of death had been determined and the incident remains under investigation according to Williamston Police Chief Jay Grubbs.

The child was found unresponsive in a playpen around noon Tuesday. According to reports, the mother called 911 and attempted CPR until EMS arrived. The father was not home at the time. The baby was taken to Greenville Memorial Hospital, where she was pronounced dead at 12:38 p.m.

“It’s been a long tough day for us all,” Capt. Russell said Tuesday night. “You hate to see such an innocent life lost, and not have any reason yet. Tomorrow (Wednesday) will be tougher with the autopsy, but we need answers.”