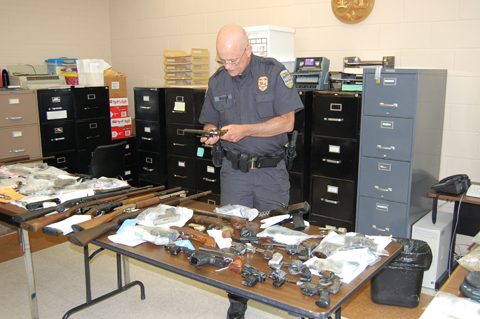 Williamston Police Cheif Jay Grubbs looks over a variety of guns confiscated from persons arrested in the Town of Williamston. The department is in the process of clearing out guns and drugs that have been placed into evidence over several years. Firearms that can either be used or traded for items the department needs will be kept while the rest will be destroyed, Chief Grubbs said. The collection includes handguns, rifles, shotguns and assault weapons. More than 30 pounds of marijuana and other illegal and prescription drugs will also be properly disposed of by the Williamston Police Department. Street value on the confiscated drugs is more than $10,000, according to Chief Grubbs. The evidence is from cases that have been judicated, Grubbs said.