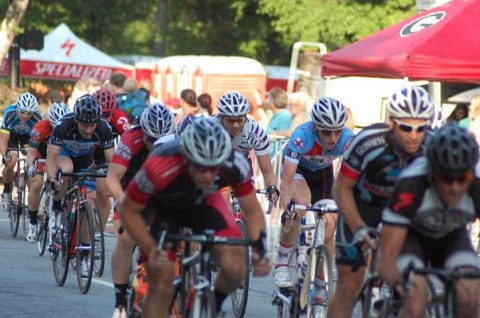 Pro-cyclists from across the nation and world will race in Anderson this Saturday, May 5 as part of The USA CRIT Series Speed Week. The series includes 7 races held over 10 days starting with the Athens Twilight held this past Saturday and ending in Sandy Springs, Georgia May 6. The series offers $150,000 in prize money to the Men’s and Women’s Professional/Elite Teams.

Speed Week features the best criterium cyclists in the world, racing the downtown streets which are transformed into international cycling competition arenas. Olympians, world and nationally-ranked men and women athletes will take to the streets to contest the series, as well as qualifying positions for the USA CRITS Finals.

Amateur races are held throughout the day leading up to pro races. Local amateur rider Justin Meade, of Greenville/Williamston, placed 14th in the Category 3 men’s morning race in Athens, qualifying to race the amateur finals criterium in downtown later in the day. Meade, who rides with Team Traveller, finished a respectable 53rd in that race after moving up from the middle of the pack to eighth place for two of the last four laps. The amateur finals includes the top cyclists from Cat 1-4 races held earlier in the day.

Meade is expected to participate in the Men’s Cat 2/3 race at the Anderson Electric Circuit this Saturday. The race will begin at 12:45 with 35 laps in downtown Anderson. Meade finished 2nd in the cat 3/4 open race of the Velo Old City Crit held in St. Augustine Florida April 14, earning enough points to move up to Cat 2 racing.

The series race schedule is: