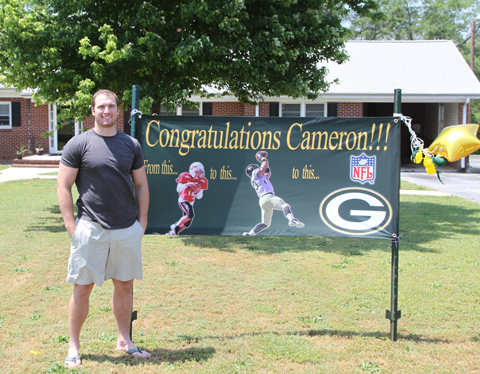 Former Palmetto High, T. L. Hanna and Wake Forest tight end Cameron Ford was picked by the Green Bay Packers as an undrafted free agent Saturday. In an interview Monday, Ford said he watched the NFL draft all day on Saturday with his parents Doug and Melanie Ford and brothers, Tyler and Chase. When the draft ended, the pressure came. He said he wasn’t expecting to be drafted but thought he might have a chance as an undrafted free agent.

While watching the TV coverage, Ford said he had been talking with his agent, whom he had signed with when the college season at Wake ended. His agent told him the Green Bay Packers were working on a contract and that someone would be calling.

“It was pretty intense after the draft ended,” he said.

About twenty minutes later, a Packers scout that Ford had worked out for earlier called.

When the call came he said he “breathed a sigh of relief.”

Ford will attend the first day of practice in Green Bay on May 1. That will be followed by organized team activities and a mini-camp.

NFL teams are allowed 90 man rosters during the offseason and the Packers have 27 slots for undrafted free agents. The first cut will take place during the third week of preseason games, reducing the roster to 75 players.

Ford said he is excited to have the opportunity, but added, it will be a long road.

There will be the training camps, learning the offense of the team and playbooks and then he said, “see what happens after that.”

During his senior season at Wake Forest, Ford started 10 games and scored three touchdowns. His second career score came on a reception against Clemson. “It was good to get that one,” he said.

As a junior he had the most catches among tight ends with 11 and had 10 catches for 120 yards as a sophomore.

Ford finished his college career with a toal of 34 receptions for 347 yards, averaging 10.2 yards per catch.

His senior year at Hanna, he help lead the Yellow Jackets to a 9-3 season, during which he caught 298 passes for 626 yards and 10 touchdowns. He had 83 tackles, five forced fumbles, five fumble recoveries, an interception and four defensive touchdowns.

He represented South Carolina in the Shrine Bowl and played defensive end on the Palmetto High varsity team for two years before transferring to Hanna.

At Wake Forest he majored in sociology. He redshirted his freshman year in 2007.

As a redshirt freshman in 2008, he sprained an ankle in the third practice of preseason camp and missed five of the first six games. He made his first career catch at N. C. State.

As a sophomore in 2009, Ford led the Wake Forest’s tight ends with 10 receptions for 120 yards. He played in eight games, missing two with a pulled hamstring and then an ankle sprain.

During his junior year, he played 12 games with six starts and tied for fourth on the team with 11 receptions. He has the most receptions among the team’s tight ends. A season long 34 yard reception came against Clemson.

Last year, as a senior, he started a career high 10 games and had three touchdowns. His first career touchdown pass came against Virginia Tech and his second was against No. 9 Clemson.

During this time and now, one of his biggest supporters, his dad, was battling cancer. Even dealing with that, he said his dad was very supportive.

“I went through some injuries at Wake. He was always positive when I would call him. He told me to keep my head up and that things were going to work out,” Ford said.

After his college football career at Wake Forest ended, Ford said he has worked with personal trainer Scott Littlejohn in Anderson. The six day a week workouts last for 2.5 hours each day and consist of a warm up, lifting weights and working on agility.

Ford said it was great growing up in the Williamston community where he received a lot of support and he learned from everybody.

“There are good friends, good family here,” he said.