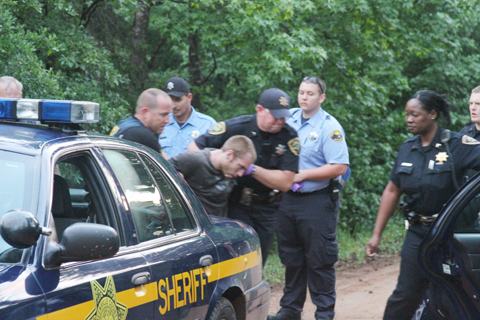 (Photo by David Rogers) – Carl Ensworth Lanphear, 22, was arrested by the Sheriff’s Deputies after more than two dozen officers from Anderson and Greenville counties were involved in a hunt for him Wednesday night. Lanphear led deputies on a car chase on S.C. 8 in Pelzer which ended with him being held at gunpoint when he entered a home in Greenville County. The homeowner, at 133 Meares Drive in Pelzer, held the fleeing suspect at gunpoint until authorities arrived.

At approximately 7:30 pm Wednesday the Greenville County Sheriff’s Office received a call to assist Anderson County Deputies with an alleged armed suspect who had fled on foot toward Greenville County. As Greenville County deputies were responding a second call was received from the homeowner of 133 Meares Drive stating a white male had entered the home and advised he was running from the police.

The homeowner stated he had the suspect at gunpoint.

Once deputies arrived at the incident location the homeowner was safely removed from the residence and the suspect temporarily barricaded himself inside the home. Deputies forced entry into the home and were able to detain the suspect after a brief struggle.

Carl Ensworth Lanphear, 22, was arrested by the Sheriff’s Office and charged with Burglary 1st degree, Resisting Arrest and Assault and Battery 1st degree. Lanphear is currently in the Greenville County Detention Center where he had a 9:30 am bond hearing Thursday morning.