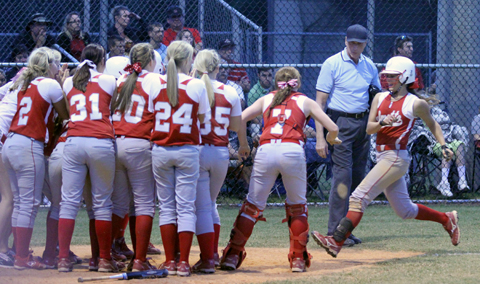 (Photo by Mike Gowan) – Palmetto’s Ryan Rector (3) is greeted by her teammates as she crosses home plate after hitting a home run during the Upper State Championship at Gilbert Friday. The Lady ‘Stangs won both games on the road against the Indians and advanced to the State Championship series. The softball team will travel to Dillion for a 6 p.m. game today (Monday) in the AA softball state championship series. Palmetto (30-6) and Dillon (27-3) both had to win two games on the road in the semi-finals to advance to the state championship games. The Mustangs defeated No. 1 Andrew Jackson and then Gilbert last week while the Wildcats beat Hanahan for the opportunity to play each other. Game 2 in the Best-of-3 series will be played at Palmetto Wednesday.