Home Sports Palmetto Mustangs Palmetto to host Dillion in Game 2 of AA Softball State Championship
Facebook
Twitter
Pinterest
WhatsApp
Palmetto’s Lady Mustangs are just one win away from a State 2-A Softball Championship. That victory could come Wednesday evening, as they host Dillon in the second game in their best-of-three title series. The game will be played at 6 p.m. on the Mustang’s home field. Should the Lady Wildcats even the series at a game apiece, the third and deciding game would be played at a neutral site on Friday.

The Lady Mustangs got a strong defensive effort and a timely offensive charge on Monday, as they went down to Dillon and pulled out a 1-0 decision in eight innings.They turned three double plays, including two at the plate, and got another solid mound performance from Tabitha Allen.

Junior Ryan Rector delivered the most significant, and the eventual game-winning, hit of the evening, sending the first pitch of the eighth inning over the center-field fence for the only run of the game.

Dillon threatened in the bottom of the inning with two runners in scoring position with two out, but Tabitha Allen struck out Lady Wildcat ace Darby Hamer to seal the outcome.

With that latest triumph, the Palmetto girls are now sporting an all-time best overall record of 31-6. 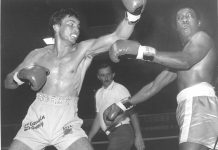