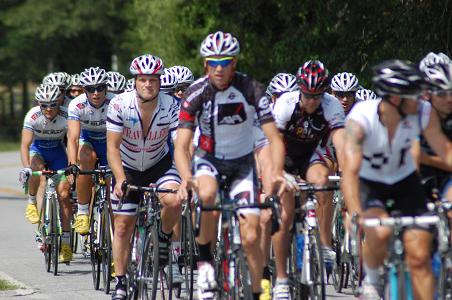 The South Carolina Cycling Road Race Championships were held in the Fork Shoals area of South Greenville Saturday. The amateur cycling race is based at the Fork Shoals Elementary School and features Masters and Category 1-5 racing throughout the day. The race course was a 15 mile loop and Cat 1/2 race was 5 loops for a distance of 75 miles. Local rider Justin Meade finished 11th overall in the Category 1/2 race. Mark Welch, who rides with the Greenville Spinners Bike Club and has family in the Williamston/Pelzer area, won the Masters 55 plus race to claim the SC State Championship in his age group.

Meade, who races for Team Traveller, finished 5th among in state riders. It was his first road race as a Cat 2 rider since moving to Cat 2 earlier this year. Teammate Rob Vogt, of Charlotte finished 25th.

Meade has raced several criterium races since he moved to Cat 2 in April . He finished 14th in Cat 2/3 in Spartanburg and 10th in Anderson during the Speed Week Crit Series.

In one of his last Cat 3 races, Meade won the Cat 3 Crit in the Rock Hill Classic Mar. 31. He recently competed with several teammates in the Wilmington Gran Prix in Wilmington Delaware and the Kelly Cup in Baltimore, Maryland.

Meade will join other Team Traveller riders in Wisconsin where they will compete next week in the Tour of America’s Dairyland. The omnium competition will travel throughout 11 Wisconsin communities, June 21 – July 1, and include four dates on the USA Cycling National Criterium Calendar.