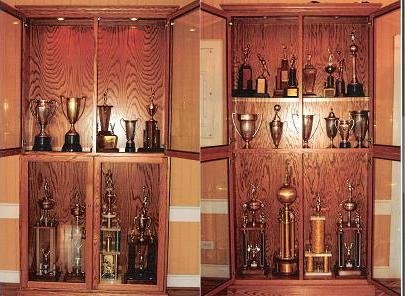 By Stan Welch – Vandals and thieves broke into the Pelzer Gymnasium Monday night, stealing as many as a dozen historic trophies and damaging the storage cases they were in.

Bradley West, who works for the Town and does maintenance on the building, discovered the illegal entry, which was affected through the basement door on the back of the building.

Cpl. J.K. Billingsley of the ACSO responded to the scene and secured the crime scene before calling for forensic investigators to respond. Investigator Hill responded and processed the scene.

West said that a representative from the Pelzer Heritage Commission came to the gym and estimated that as many as 10 or 12 trophies were stolen.

West said that their lineage was from back in the 1920s up into the 1960s. “Some of them may have had precious metals in them, making them more valuable, I suppose,” said Town Clerk Skip Watkins.

In addition copper tubing was cut from the buildings plumbing system. Some was taken, and some was left, leading to speculation that the thief or thieves were scared off for some reason.

No estimate on the loss is available at this time.