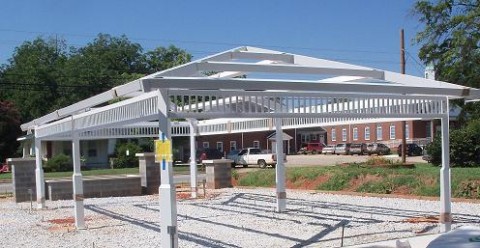 By Stan Welch – A combination of bad weather and bureaucratic tangles has slowed the progress on Chapman Park in West Pelzer. The park, which is budgeted at approximately $175,000, was slated for opening in mid to late August, but Town Clerk Paula Payton said that recent rains and some troubles getting various permits from the County had slowed the pace.

“It appears that the contractors have gotten the permit issues worked out, and the ground is drying quickly, so they are back at work. Whether they can make up enough time to hit the original target date depends on the weather as much as anything. But they definitely lost some time.”

The final steps of the park, which has a small covered pavilion at the front of the park, and a playground towards the rear, will involve the placement of a veterans’ memorial. Based on the discussion at the last Council meeting, a good deal of work remains before that final design is approved.