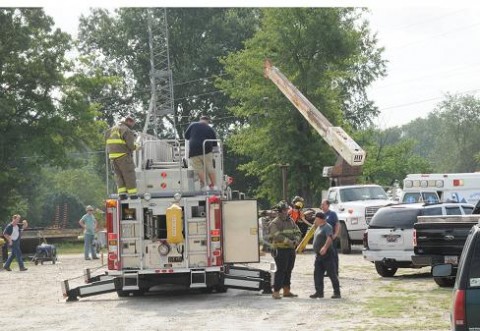 Emergency personnel with Centerville Fire Department and Piercetown Fire Department work at the scene of an accident at Lazer Construction Company on Hwy. 81. While dismantling an 80 foot portable antenna tower, a worker’s hand was caught when he grabbed a winch cable.

Piercetown Fire Department’s Rescue crews stabilized the tower as best they could and then called for the ladder truck that was able to reach the top of the towers and secure the structure, preventing it from falling over. That allowed crews to release the tension from the cable and free the man’s hand. The worker, Richard Bell from West Pelzer may lose the tips of three fingers according to a spokesman for the company. The tower being dismantled was used when regular cell phone towers didn’t work properly, often in emergency situations, officials said. 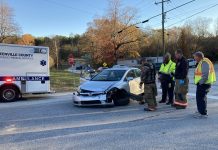