Even though customers have enjoyed their barbecue for more than a month, The Smokin’ Pig restaurant held a ribbon cutting last Thursday, making their opening in Williamston official. The business actually opened June 8 and so far the response has “been great” according to Ethan Deavers who operates and runs the family owned business. “Williamston has been good to us,” he said.

“It is an honor and privilege on behalf of the Town of Williamston to welcome The Smokin’ Pig barbecue,” Mayor Crout said at the ribbon cutting. “They have brought 23 new jobs to the town of Williamston and another great place to eat.”

Even before they opened in Williamston, word was out about their great reputation. The restaurant is the second location for the Smokin’ Pig.

The original location was opened in Pendleton three years ago by his father, Barry.

Both locations offer smoked barbecue which is slow cooked fresh on site and features a special dry rub developed by his father, according to Deavers.

The meat from the whole pork butts is pulled and chopped daily right in the kitchen area, sometimes as the customer is placing their order.

“It is as close to cook to order as you can get,” he said.

In addition to fresh cooked barbecue, the Smokin’ Pig has a special secret recipe sauce which is kettle cooked at the Pendleton location.

When asked why they decided to open a location in Williamston, Deavers said the area needed a barbecue restaurant and they wanted to give area residents a family oriented place with good food, good music and a good time.

“We have tried to create something most places can’t or don’t offer,” he said. “We want it to be the word of Williamston.”

The restuarant is currently only open three days a week, Thursday through Saturday, for what Deavers calls a “weekend celebration.”

“We want it to be the place people come to when they are ready to kick back and have some food,” he said. “And they don’t have to drive to Anderson or Greenville to get it.”

“Williamston is a small town and the people deserve a good selection of food,” Deavers said.

They have sandwiches, sandwich baskets with one side and plates with two sides and roll.They also have kids menu. All sides are made from scratch.

The business has seating for 60 and employs 23 people.

Though he did not attend the ribbon cutting, Dr. R. Mack Durham said, “The Smokin’ Pig is a quality addition to our local businesses. Ethan Deavers and his staff are making their mark here in our community with good food and great service.”

Durham is chairman of the Palmetto Area Economic Development Committee. “The PAED is very happy to welcome them to our community,” he said.

“We really appreciate our customers,” Deavers said. “Williamston has been very good so far. We look forward to growing and spreading the word,” he said. When asked how things have gone since the business opened, Deavers said, “It has been great. Better than we expected.”

The Smokin’ Pig is located at 720 Anderson Dr., in Williamston.Hours are Thursday, Friday and Saturday, 11 a.m. to 9 p.m. 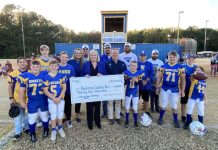 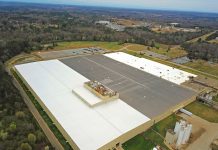