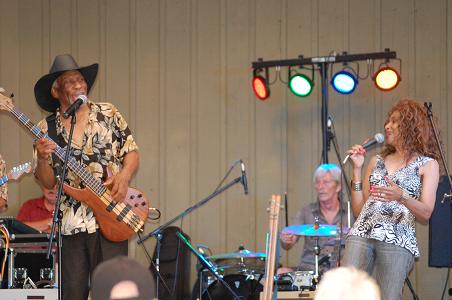 Festival goers and organizers of the 31st Annual Spring Water Festival enjoyed near perfect August weather during the two day festival held this weekend in Williamston.

Friday’s crowd enjoyed a cool clear evening with a Carolina moon rising over the stage as they listened to the beach sounds of the Out-of-Towners.

A variety of entertainment and activites kept people entertained throughout the day on Saturday with as many as 1000 people watching local blues musician Mac Arnold and his band Plate Full of Blues as they closed out the festival.

Preliminary estimates for a steady stream of people that attended the festival are 8000 to 10,000 over the two days the festival was held.

Springwater Committee Chairman David Meade said on Saturday, “The crowd was not the largest the festival has seen, but it was a steady crowd with people coming and going throughout the day.”

“Friday evening was another great turnout for the festival with a good crowd at the Amphitheater stage and steady sales for food vendors,” he said.

“Overall it was a great festival this year,” Meade said.

More on the Spring Water Festival will be posted soon and in the next edition of The Journal.