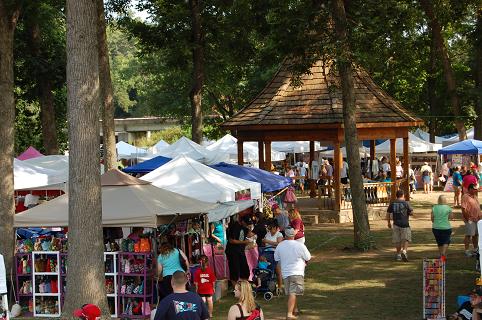 Festival goers and organizers of the 31st Annual Spring Water Festival enjoyed near perfect August weather during the two day festival held over the weekend in Williamston. Estimated attendance by police, fire, and festival organizers for the crowd over the two days amounted to about 11,000. “The crowd was not the largest the festival has seen,” said Springwater Committee Chairman David Meade. “But overall it was probably one of the best festivals we have had.”

“It was one of the smoothest running festivals we have had,” Meade said. “There were approximately 800 to a 1000 people at the Amphitheater listening to the Out-of-Towners on Friday. By the time Mac Arnold and Plate Full’O Blues started at 6, there were almost 1000 people there in addition to those in the craft and food vending areas of the park.”

“A threatening thunderstorm never crossed I-85 and other than a few sprinkles, the weather couldn’t have been better,” Meade said.

Williamston Fire Chief Steve Ellison said he thought as many as 3000 people attended the festival on Friday. “The craft and food area of the festival was crowded all evening,” he said.

On Saturday, the car show sponsored by the Williamston Fire Department was the biggest ever, according to Ellison, with 151 registered participants and more than 50 more that were not registered.

With more than 200 vehicles, “It was the largest we have ever seen,” Ellison said. “The cars were high calibre and quality and we ran out of space to park them at the fire department and on Main St.”

Ellison said there were several Rat Rods at this year’s festival and organizers created a new category for them. Rat Rods are unrestored and sometimes pieced together hot rod vehicles.

One vehicle from Seneca on display at the festival was the featured rod in the August issue of “Hot Rod” magazine.

According to Ellison, there were car clubs and groups from Georgia, Rock Hill and Laurens. Most were from the Anderson area and there were a number of local cars, he said.

Ellison said that one reason car enthusiasts enjoy bringing their vehicles to the Spring Water Festival car show is that there are other things for them to do while here.

Overall Ellison was pleased with the car show and the crowd that came to look at them. “We had a crowd all day long,” he said. “It was great, one of the best we have seen.”

The antique Williamston fire truck was busy all day long with more than 500 riders. Miguel Martin of Williamston was the winner of the 55 inch TV the Williamston Fire Department gave away.

Craft chairperson Ellen Harvell said that most of the craft vendors were pleased with their sales and enjoyed being a part of the festival.

A vendor from Palm Beach Florida told her she “had a good time” and planned to come back to the festival. “She said it was a wonderful festival,” Harvell said.

Another vendor reported surpassing sales from last year by 2 pm on Saturday.

“Many of our newcomers signed up for next year,” Harvell said. “The vendors were pleased and they like this festival.”

She said comments from vendors were that there were a lot of pleasant people attending and that it was a “pleasant well run festival.”

She said a lot of people enjoyed the craft area on Friday and that Saturday the crowd in that area was steady all day long with peaks and valleys. “We had a good crowd all day and from 2 to 3 it was real strong,” she said.

More than 50 non-profit and business displays and several political candidates were lined along the park’s sidewalk giving out information, water and talking with festival visitors. Organizer Dianne Lollis said, “There was a good response and everybody was happy.”

One issue which arose just before the festival began on Friday was the selling of T-shirts by The Pelzer Heritage Commission. The issue raised strong comments on Facebook.

Organizers of both groups worked out a solution with both groups agreeing to work together in promoting each of their events.

Other than that the festival went without a hitch, Meade said.

Williamston Police Officer Jesse Harris said there were almost no problems for law enforcement. “There were no drunks and no arrests,” he said. “It was a good crowd.”

According to Harris the traffic flow into and around town went well and there were no wrecks or fender benders during the festival. Harris said some people coming to the festival had a problem finding parking but overall it went well. “It went real well and there was a great turnout,” he said.

All of the designated festival parking lots including the ballfield area and some undesignated lots were full, Harris said.

Williamston Mayor Carthel Crout said that it was a smooth running festival and “one of the best we’ve had.”

Crout said he had a phone message from a lady from Brevard, NC in which the caller stated how great she thought the festival and the car show were and “What a wonderful little town Wililamston is.”

“I think it was well planned and the Springwater Committee did a wonderful job of organization and planning,” Crout said. “It was very smooth and we had great crowds. I heard nothing but good comments. It is a pleasure to work with such a great committee,”