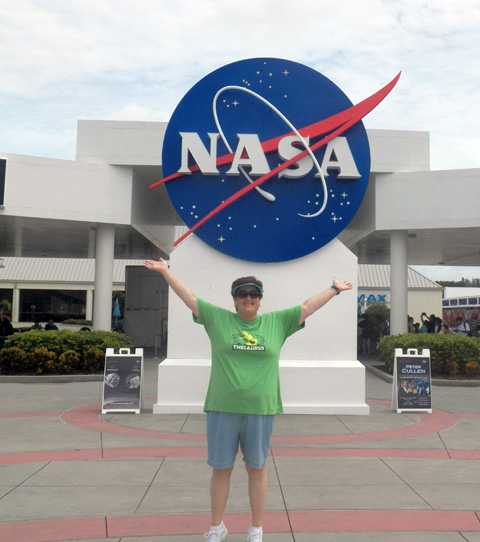 Pamela Frady, 8th grade science teacher at Palmetto Middle School in Anderson School District One wanted to find a way to keep up with current, news breaking science. So, this summer, she decided to follow NASA, USGS, and various other government agencies on Twitter.

“I was very new to social networking via Twitter, but I wanted to know what was happening on a daily basis. Mainstream news media outlets do not spend a lot of time on topics we may be studying so, in order to be better informed and to pass along exciting topics in science I joined Twitter.”

As a result an opportunity presented itself to apply for a program that would allow 50 lucky tweeters to go to NASA to be a part of an event.

Frady was chosen to take part in the Radiation Belt Storm Probe (RBSP) event and launch. RBSP is designed to help us understand the sun’s influence on Earth and near-Earth space by studying the Earth’s radiation belts on various scales of space and time. One day was spent touring the facilities. The next day, she was able to take part in a special press conference shown live on NASA TV.

Pamela Frady stands in front of the NASA sign on her visit to NASA for a program allowing tweeters to be a part of a special program.