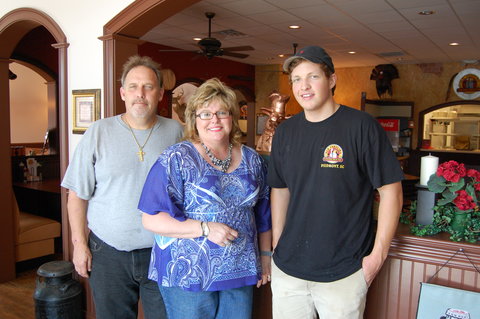 By David Meade – Glenn and Sherry Hardy are thankful to be alive and to be serving barbecue again. In the last three years, the couple lost their business, their home and suffered a terrible car accident which changed their lives.

But with the help of family, friends, and others in the community, and a new found faith, they opened the Ole Carolina Smokehouse in Piedmont earlier this year. In addition to serving old and new customers at the restaurant, they have a new purpose in life.

“It was a horrific day which changed our lives,” said Sherry about the accident. “We never intended to get back into barbecue. You have to love the restaurant business.”

The road back to owning and operating their own barbecue business was not an easy one.

On May 15, 2011, the Hardys almost lost their lives when a vehicle involved in a high speed police chase crashed into their PT Cruiser, severely injuring them both and their son, Cole.

The Hardys were the owners of the Old Country Smokehouse on Hwy. 81 North of Anderson where they had operated a barbecue and catering business for 16 years.

The business closed in 2009 and the building was severely damaged by fire. The accident which changed their lives happened in May of 2011.

Following the wreck and after months of therapy, Hardy and his wife were able to begin getting back on their feet. With the help and support of family, friends and former customers, they eventually were able to reopen a business that had been so good to them before.

“We went from losing everything including our house,” said Glenn. “With help from friends and family and prayer, even people that didn’t know us, with fundraisers. They helped us get to this point where we are. By the Grace of God, we’re here.”

The opportunity to get back into the barbecue restaurant business came while Glenn was still looking for a job. According to Sherry, the owner of the shopping center where the new barbecue business is located said he wanted to help.

“After five months in bed, Glenn was looking for a job and Mr. Garrett met with Glenn and asked him if he was interested in getting back into the barbecue business.”

“We decided we did and did it,” Glenn said. “But for totally different reasons this time.”

Hardy said that the changes in their lives through God and their testimony were why they decided to go back into business. “If we can reach one person,” he said.

They opened the Ole Carolina Smokehouse at Hwy. 86 in Piedmont on March 1, 2012.

“It is just amazing,” said Sherry. “So much of what God intended us to do and how it all came about. It seemed like all the prayers had been answered. All this through the Lord.”

“We want to give back to the community what the Lord has given to us.”

“It was a tragic day, in a way, Glenn said, “but it was the best day of our lives. We realized what was important.”

“We do it on faith now,” he said, “We try not to worry. It tells the Lord you don’t believe he will help you get through it. Everyone needs to know he is there for us.”

“When we lost the other place, we couldn’t get peace,” Sherry said. “And then the wreck happened. We now realize what is important in life.”

In their menu, there is an explanation of how they are where they are. It reads:

“By the grace of God we all survived and have been given a second chance to be a part of God’s master plan in helping others realize that the Lord is near to all of us in any situation.”

“Our mission is to serve our community the best barbecue and fixings possible, while at the same time touching others’ lives in a positive way. If by sharing our story of how God saved us “on the bridge” and how God placed his angels around us that faithful day could reach even one person that may not have a relationship with Gor Our Father, then it will all be worth it.”

“Our goal is to have our customers feel at home and part of our family while giving exceptionally good customer service.”

A banquet room seats 100 and the restaurant seats up to 130 customers.

In addition to new customers, many of their former customers are again enjoying Glenn’s barbecue and the other items that are offered.

Both Glenn and Sherry said they see a lot of their old customers who are new to the location and who tell them, “We are so glad we found you.”

They serve catfish, flounder and shrimp and offer a child’s menu with chicken fingers, corn dog or small barbecue sandwich.

The barbecue, turkey and beef is slow cooked over red oak for 16 hours and the chicken and ribs are cooked for four to eight hours.

The rotisserie cooked chicken cooks over the old hickory pit during the night.

Side items including slaw, beans, macaroni and cheese and hushpuppies are homemade. The sauces are a special recipe.

A specialty offered at the restaurant is sweet potato hushpuppies. The also have homemade desserts.

“We want to be an asset to the community,” Glenn said. “We are family oriented and non smoking. We have good customers. We want them to be happy and leave happy.”