A Williamston EMS ambulance passes by a GMC pickup truck that struck a pedestrian Thursday afternoon on Midway Road. The pedestrian apparently stepped into the path of the truck. According to witnesses the pedestrian was attempting to go around a low hanging limb when she was struck. The GMC was meeting another vehicle traveling in the opposite direction and could not move over to avoid her. She was rushed to AnMed by EMS. (Photo by David Rogers) 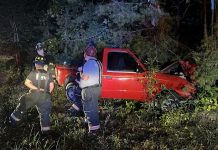