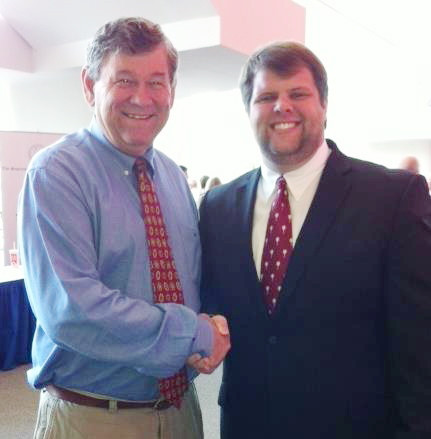 James M. “Jimmy” Cox, Jr. announces that G. Lee Cole, Jr. has joined him to form a new law firm, Cox & Cole, Attorneys at Law. The new firm is located at 32 East Main Street in Williamston. “I am very excited to have Lee has my new partner,” Cox said, “he has a sharp legal mind and a passion for serving people in this community.” Cole was also happy about the new partnership saying, “I’m glad be working with an experienced, accomplished lawyer like Jimmy, and I’m glad to be working in my hometown.”

Cox is the son of the late Mr. and Mrs. James M. (Helen C.) Cox of the Cheddar community. He graduated from Wofford College in 1971 and moved to Charleston to work at the Department of Social Services. He later attended the University of South Carolina School of Law and graduated in 1977. Cox has worked as an attorney in Williamston since 1977. He served on the Anderson County Council from 1984 to 1989 and served as Chairman from 1986 to 1989. Cox also served as the Williamston Municipal Judge for 13 years. He is married to Kay Smith Cox and has one daughter, Maxi Cox Farnsworth who is married to Stephen Farnsworth of Taylors.

Cox and Cole are both active members and leaders of Grace United Methodist Church in Williamston.

Cox & Cole is a general practice firm which handles a variety of cases including: criminal defense, divorce, custody, visitation, personal injury, real estate closings, deeds, wills, powers of attorney, and probate matters. “Please call us with any of your legal needs at 221-8556 or 847-9289,” Cole said.