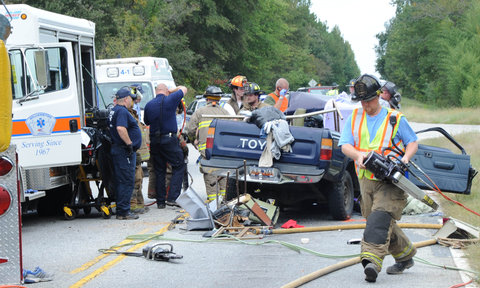 James Patrick Wilson, 42, and Kathy Jean Cromer, 51, were fatally injured in a two vehicle accident on Hwy. 29 at Welcome Road Wednesday. The couple were heading south on US Hwy. 29 in a small pick up filled with scrap metal when they struck a north bound pick up head on. Ricky Harvey Duncan, 54 and William Troy Tabor, 53 were injured and transported to Greenville Memorial Hospital. Duncan was listed in critical but stable condition and Tabor was in good condition a spokes person at the hospital said. Both men were trapped in the truck until rescue workers freed them. Both men were wearing seatbelts, officials said. According to reports, Duncan was driving a 2007 Toyota on US Hwy. 29 North when the truck carrying Wilson and Cromer attempted to pass a tractor-trailer causing the accident. Whitefield firefighters, several ambulances and SC Highway Patrol troopers responded to the accident.