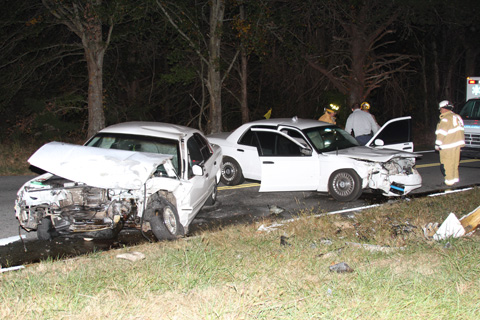 A Williamston police Department booking officer/dispatcher was injured in a head on collision Sunday night on Highway 86. The acccident happened near the intersection of Syracuse Road, Piedmont. A car apparently crossed over and struck the cruiser head on. Pelzer EMS took the officer to Greenville Memorial hospital. The driver of the other car fled the scene on foot. Three and Twenty firefighters assisted at the scene. (Photo by David Rogers)

Monday – A Williamston Police Department booking officer/dispatcher who was injured in a head on collision Sunday night is recovering from surgery officials said.

Officer April Stegall suffered multiple injuries including a broken arm, broken left ankle, fractured ribs, broken finger and other injuries when the 2002 Ford Crown Victoria she was driving on Hwy. 86 was struck head on by a 1997 Buick driven by Valtrez Leeshaun Lomax of 138 Pointer Ln., Greenville. The accident occured near the intersection of Syracuse Road and Hwy. 86 in Piedmont.

The vehicle Stegall was driving was the town’s Victim’s Advocate vehicle, according to Williamston Police spokesman Jesse Harris.

Lomax was arrested by the SC Hwy. Patrol after leaving the scene of the accident on foot and being spotted walking along Hwy. 8 by Officer Harris.

Harris reported that while on his way to the Greenville Hospital to check on Stegall, he observed a black male fitting the description of the driver who had left the scene.near the Twelve Oaks subdivision. After confirming the description of the missing driver, Harris waited for the SC Hwy. Patrol to arrive at which time Lomax began to run. Harris and Trooper Pruitt chased and subdued Lomax and then placed him under arrest.

Lomax is facing charges of leaving the scene of an accident, possession of a controlled substance and driving under the influence.