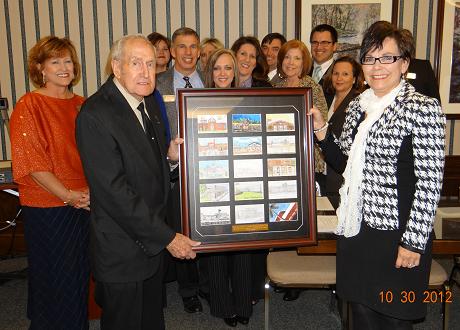 By District One School Board

Joe Pack was honored on Tuesday, October 30 by Anderson School District One and SCSBA for 44 years of service to education. A special reception was held in his honor at Palmetto High School and he was presented with a commemorative cup from Dr. Paul Krohne, Executive Director of SCSBA during the regular school board meeting.

Dr. Krohne stated, “As a former president of the South Carolina School Boards Association, Joe serves as a model for excellence in local school governance for the entire state.  His commitment to serving the children of South Carolina is a vivid reminder to all of us of what school board service is all about.  He will be missed.”

Jane Harrison, Director of Elementary Education, presented Pack with framed artwork of all 14 schools and career center in the district. “The pictures represent students and teachers from each school. Mr Pack has encouraged the schools and inspired them to be the best they can be,” Harrison said.

Pack was surprised by the recognition and said, “I have loved serving Anderson One on the school board over the past 44 years. I have always wanted the best for the children in our district even through some difficult budget issues. I would encourage everyone to be involved in public education. I am really going to miss it.”

For the past 44 years, Pack has served on District One’s Board of Trustees where he assumed leadership roles of board chairman and secretary along with representing the district on the Career and Technology Board for the past 30 years and the Anderson County Alternative School Board for the past 10 years since their inceptions in 1971and 1996 respectively.

He has also held a position on the Anderson County Alternative School Board for ten years. At the state level, Mr. Pack holds the distinction of serving on the South Carolina School Board Association’s board longer than any other director.

During his 27 years of service, Pack has held all offices before his final stint as past president in 1993. In honor of his dedicated service and leadership for over half the SCSBA’s history, Mr. Pack was awarded the NSBA Distinguished Leadership award in 1997. Mr. Pack was also awarded the Order of the Silver Crescent in 2005. After serving 44 years, which is believed by some to be the longest tenure in the state, Mr. Pack has decided to step down.

Another board member and vice chair of the board, Nancy Upton, also took the opportunity to reflect on Mr. Pack’s service to the district. “Few people have had as much impact on the operations, integrity and development of public education as Mr. Pack.  His years of service on our school board, the state and national school board associations have protected children, inspired administrators and set the example for school board trustees everywhere.”

District One Superintendent Dr. Wayne Fowler said, “I admire Mr. Pack for being a true servant leader and an advocate for public schools in South Carolina. During his time on the board, he has always focused on the needs of all the students in Anderson District One. He is concerned about our employees. It is not uncommon to see him visiting schools, shaking hands with teachers and staff and providing encouragement. He is one of the finest men I have ever met. His knowledge of the district’s operations will be missed on the board.”