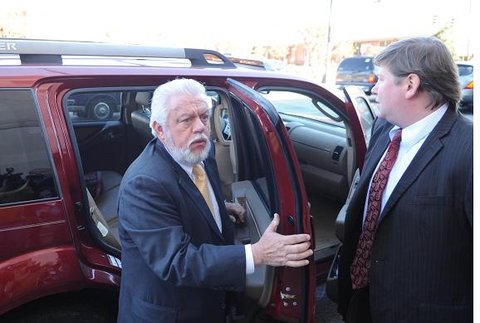 Ronnie Gene Wilson, former Anderson County Councilman from the Powdersville area, was sentenced to 235 months, or approximately 19.5 years in federal prison Tuesday afternoon. He was also ordered to make restitution in the amount of $57.4 million. The sentence is the result of Wilson’s plea of guilty to two counts of mail fraud, in association with a $90 million Ponzi scheme run by Wilson.

Those locations have since been listed as assets to be sold by a federal receiver appointed by the court.

Wilson appeared briefly two weeks ago in the trial of the lawsuit between Anderson County and former administrator Joey Preston. Wilson had been scheduled to testify about his actions in the 2008 awarding of a $1.2 million severance package to Preston. At the time, Wilson was chairman of the personnel committee and unexpectedly presented the offer at a November 18 Council meeting.

The events of that night and other actions associated with that meeting were the subject of a three year investigation by a state grand jury, which failed to hand down any indictments. Among the issues before the court last week was whether Wilson’s actions might have been a quid pro quo in exchange for a lucrative consulting contract Preston gave to Schaum in the weeks just before he left the County’s employ.

Wilson appeared for just a few minutes, invoking his Fifth Amendment rights ten times before Troy Tessier, representing Anderson County, ended his line of questioning. Schaum later testified more fully about the circumstances of her receiving the contract. Spartanburg Judge Roger Couch is expected to rule on the case following the Thanksgiving holidays.

Despite Wilson’s plea bargain, his legal troubles may not be over yet.

The U.S. Commodity Futures Trading Commission (CFTC) has also filed an enforcement action against Wilson and his business, Atlantic Bullion and Coin, focusing on Wilson’s actions during the period between Aug of 2011 and February of this year. According to the complaint, Wilson or his agents sold more than eleven million dollars worth of silver contracts during that time, but failed to purchase the actual silver as promised.

South Carolina Attorney General Alan Wilson filed a complaint in the Fifth Judicial Circuit Court alleging that Wilson’s bullion and coin brokerage business was in fact a multi-million dollar Ponzi scheme. The number of victims is estimated at approximately nine hundred, with people from as many as twenty five states being affected.

In the complaint, Attorney General Wilson alleged that Atlantic Bullion & Coin (AB&C) had represented to investors that the silver purchased on their behalf actually physically existed, even though it did not in fact.

The complaint also claimed that neither Wilson, nor any of his sales representatives, are licensed to sell securities in South Carolina, or any of the other approximately 25 states in which the securities have been sold.

Preston, who has admitted investing $200,000 with Wilson and receiving a profit of $400,000, says he was also a victim of the scheme, despite conceding that he did refer other investors to Wilson. He is currently negotiating a payback arrangement with a federal court appointed receiver, according to his testimony in court last week.

Despite Wilson’s promise to make full restitution, the receiver has previously stated that to recoup twenty per cent of the losses would be an acceptable accomplishment.

Several weeks ago, Wallace Lindsey Howell was also arrested on charges of mail fraud. He remains in jail due to his refusal to cooperate with authorities in even the simplest procedural processes.

Federal authorities have stated previously that those who participated in the scheme should come forward, and that the investigation is still active and ongoing.