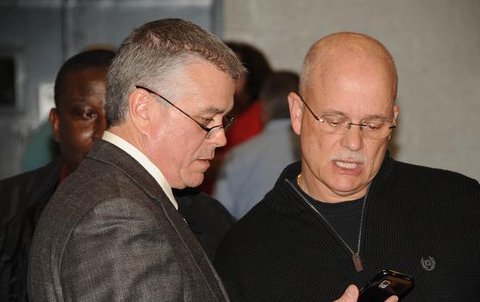 Dr. Mack Durham (left) and former Williamston Police Chief Jay Grubbs look at election numbers on a cell phone near the end of ballot counting Tuesday. Dr. R. Mack Durham won the runoff election in Williamston by a total of 71 votes or 54 percent and will be the next mayor of the town. Durham had a total of 416 votes to incumbent mayor Carthel Crout’s 345.

Durham carried the Williamston Mill precinct with a total of 157 votes to Crout’s 92.

In the Council Ward 4 race, former councilman and challenger Otis Scott has apparently won the seat by a margin of just five votes.

Election officials were recounting the ballots for the council race as of 9:45 p.m.

In the Williamston City precinct, Looper had 222 votes while Scott had 281. Looper carried the Mill precinct with 149 votes to Scott’s 96.

All vote totals are uncertified.

Durham and Scott will take office in January, 2013.

Durham has served one term on council and ran on a platform of honest representation of the consensus of the community, increased responsible stewardship of revenues and efficiency of duties by the local government and development of local jobs and improvement of community enrichment and quality of life programs.

He said his plan provides actions to implement the town’s stagnant comprehensive and strategic planning.

Improvement of Main Street facade and streetscape, increased availability of local activities and events, and economic development, all with a focus on sustainability, top his list of priorities.

During the campaign Durham said he had a vision and a plan to realize the greater potential of the Williamston area.

Durham also said during his term as Councilman he gained valuable experience, completed training in both local government and economic development, and has seen the potential strengths and weaknesses of the current Administration and Council.