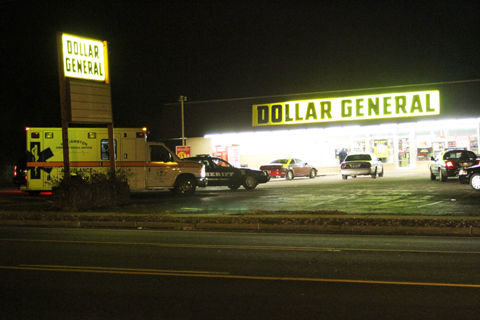 Anderson County Sheriff’s deputies assist Williamston officers following a robbery at the Dollar General on West Main Street Sunday night. Williamston EMS also responded and checked a customer who suffered injuries to his head and face when he attempted to interrupt the armed robbery. (Photo by David Rogers)

Albert Pressley Baskin, 71, was the only customer in the store at approximately 9:30 p.m. when two black males entered the store demanding money. Baskin said he was toward the back of the store when he heard someone state “Give me your money.”

Baskin said one of the men approached him and threatened him with a tazer.

He said he was tazered and went down but immediately came back up which Baskin said “unnerved the robber” who said, “I’ll shoot you.”

Baskin responded, “No you won’t” and began throwing items off the shelf at him. Unfortunately the items he was throwing were coloring books and crayons.

Baskin said the man backed up and he was able to get past him and had the intention of getting to the canned food aisle but when he got to the corner of the aisle, he collided with the rack.

He said he wasn’t sure if that was when the robber hit him with the gun. Baskin said he was hit more than once but didn’t really feel it.

During the assault Baskin was struck repeatedly in the face and head and at some point the gun went spinning down the aisle.

He said he saw the gun and was headed toward it. “I’m 71 years old,” Baskin said. “He almost jumped over me so I went in the other direction.”

Baskin said he went out the front door to his car to call for help. He heard the robbers say “He got out, we’ve to get out of here.”

As the robbers left the store, Baskin said he told them he had called the police and they were coming. The men went around the corner of the building and the police showed up within a minute or two, he said.

“I just reacted,” he said. “It really took him by surprise, I could see it in his eyes, when I came up from the taze and started throwing things.”

Baskin said he called his wife and told her there had been a robbery and he would be there for awhile but didn’t tell her of the extent of his injuries until he got home. After refusing to go the hospital to be checked out, he decided when he got home he should go. The result was six stitches under his eye and staples on the top of his head.

According to police reports, the two men entered the store demanding money. One of the male robbers had a handgun and the other was holding a tazer. As they entered the store, the two clerks, who were at the front of the store began running toward the back where a customer, (Baskin) was.

One of the robbers took a female store clerk to the back of the store and turned the lights off while the other robber made the other clerk open the cash register.

The robbers left the store with $243 in cash according to Interim Police Chief Jesse Harris. Harris said the Anderson County Sheriff’s Office brought K9s and tracked the robbers to a nearby wooded area beside the store and to the Nationwide parking lot where they may have entered a vehicle.

He said the Williamston Police Department is working with other agencies on the investigation.

Anyone with information is asked to contact the Williamston Police Department or Anderson County Sheriff’s Office.