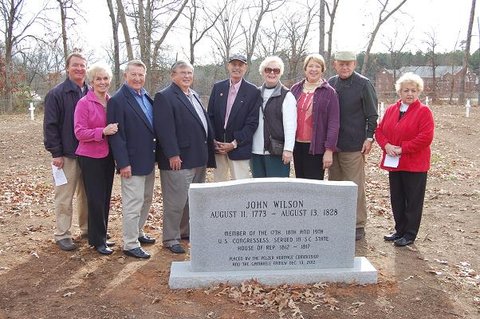 Pelzer is remembering its past.

A special unveiling and dedication service was held Tuesday for a new marker which has been placed in the Wilson family cemetery in Pelzer. The marker was placed in the historic cemetery by members of the Gambrell family, descendants of John Wilson, with help from the Pelzer Heritage Commisssion.

John Wilson Jr., was a US Congressman and SC State House member, whose family owned the land on which Pelzer town and mills were built. He is buried in the family graveyard in Pelzer.

Over years the graveyard fell into disrepair, overgrown with trees and shrubs and practically forgotten.

Family members of Wilson and Captain Ellison Adger Smyth traveled from Columbia, SC, Flat Rock, NC and Mississippi to attend the service and to tour the town which their forefathers helped establish.

Participating in the service were Quinn Pearson, Associate Pastor of Life Journey Church and Brad West, representing the Town of Pelzer.

Pelzer Heritage Commission historian Elaine Tumblin Hunt, presented a historical account of John Wilson settling in the area in the early 1700s after coming from Ireland, and the hardships the family endured. “they came looking for a place where they could own land. This is where they intended to raise their family and bury their dead.”

Hunt recounted how the land had to be cleared and a small cabin built, while the family made a living. Eventually Wilson’s Ferry was established by the family as a business enterprise to get people across the Saluda River. Wilson died in 1823.

His son, John Wilson Jr., acquired more of the surrounding countryside, expanding the original 200 acres to 535 acres and accumulated wealth amounting to $11,000 in today’s dollars, Hunt said. He also continued to operated the ferry and became a member of the SC legislature and later served as a three term US Congressman, along with John C. Calhoun.

Wilson was buried in the family cemetery which reportedly has more than 100 people buried there. The last known burial took place between 1880 and 1890.

Francis J. Pelzer bought the existing Wilson plantation in the 1870s and began making it into a textile mill town, Hunt said.

Pelzer, along with William Lebby and Smyth, were co-founders of The Pelzer Manufacturing Company, which was chartered in 1880.

The town had 5000 people who were put to work building dams, cutting trees and making brick, she said. “By 1882 it was a thriving community.”

Hunt said Ellison Adger Smyth was “so revered in this town . . .”

She said he was a genial man with humility “who made sure their needs were met.”

“Because of this legacy, we still have and can still enjoy the privilege of a beautiful town.”

After being diagnosed with lung cancer in 2010, Ron Gambrell began researching his great-great-great grandfather, and after seeing an internet article published in The Journal, was led to Pelzer Heritage Commission President Dianne Lollis.

The day was special for Gambrell, who has lived longer than his doctors expected. He was able to make the trip to Pelzer and to participate in the monument unveiling for his ancestor.

Lollis said Pelzer Historic members used old newspaper articles and records provided by Gordon Ballard and others to determine where Wilson’s grave was located in the cemetery.

An old soapstone marker was all that marked his resting place.

There are no records of who else is buried in the cemetery because they were destroyed in a fire at the mill office where they were kept. The only other grave that has been identified is one of a dog that belonged to one of Pelzer’s founders, Captain Smyth.

Smyth owned property in Flat Rock known as “Windy Hill” and Connemara, which is also known as the Carl Sandburg home.

During the service, Dianne Lollis read the marker dedication which was followed by undraping of the memorial by Larry Coker and Ron Gambrell. Coker presented the prayer of dedication.

Before the dedication service, the out of town guests met at the historic Pelzer Presbyterian Church, which Smyth built, and walked over to view the Smyth house.

While at the church, they watched as Lee Gray played the antique pipe organ.

A meal was provided and the Real Life Wesleyan Church provided a van which was used for a tour of Pelzer.

Heggoy said she had enjoyed the “Fantastic hospitality” and that going on the tour and hearing the stories of Lollis and members of the historic commisssion, about growing up in Pelzer, “Was just a delight.”

The service was also attended by local artist Thomas Addison, who has documented history of the area including the last skirmish of the Civil War, which Smyth was involved in.

According to his great-granddaughter, the story her family was told was that Captain Smyth was about 15 years old when he was a part of the brief skirmish, which is the last recorded “battle” east of the Mississippi River.

According to Heggoy, after encountering Stoneman’s Raiders near Williamston, Smyth walked back to Charleston along with other Citadel cadets. He went to work for Francis J. Pelzer in Charleston and eventually came back to the area with Pelzer to establish the mills.

The skirmish is commemorated by a historical marker in Mineral Spring Park and a mural by Addison which is in Williamston Municipal Center.