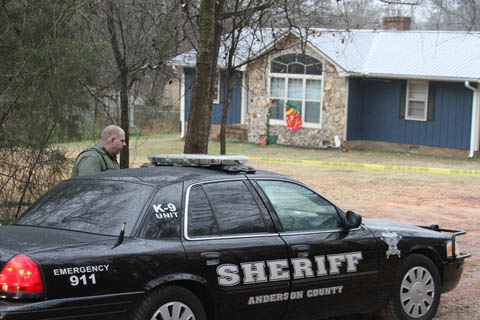 Authorities are investigating an incident in which a son doused his mother with a flammable liquid and then set her on fire early Tuesday morning. According to authorities Shawn Davis lit his mother Debra Davis, 61, on fire at her home on Crawford Street off River Road in the Wren community. He then went to his brother’s house on Langston Street in Piedmont where his brother apparently shot him. The mom was taken by Pelzer EMS to Greenville Memorial Hospital suffering from third degree burns and was later transported to the Augusta Burn Unit. Shawn Davis was taken by Greenville EMS to Greenville Memorial hospital and treated for a non-fatal gun shot.

Investigators with the Greenville County Sheriff’s Office said that no charges will be filed against the family member who shot Davis. As of press time, the Greenville Sheriff’s Office did not have any criminal charges to file against the suspect in the burn incident. Any criminal charges against Davis will come from Anderson County, officials said. Wren firefighters had set up a landing zone for Life Flight medical helicopter but the chopper turned around and went back to its base in Anderson due to weather. (Photo by David Rogers)