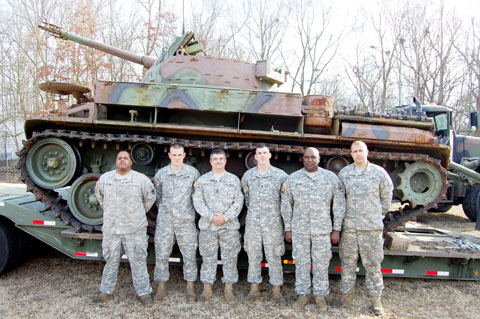 The M42 A1 Duster anti-aircraft tank that has stood parked in front of the Williamston National Guard Armory for thirty years is being relocated. Members of the Field Maintenance Shop #2 in Greer were dispatched to Williamston last Thursday to pick up and transport the 24 ton vehicle.

The anti-aircraft tank was possibly built in 1945, shortly after WWII and may have seen action along with others in Korea and Vietnam, according to Master Sgt. Chad Hightower. It was decommissioned and brought to the home of the 151st Signal Battlaion in Williamston in the late 1970s or early 80s. Sgt. Hightower said the vehicle will be sandblasted, repainted and then placed on display at the State Military Museum in Columbia. Helping move the tank are (L-r) Sgt. Derrick Dewalt, Staff Sgt. Stronczek, Master Sgt. Chad Hightower, Sgt. Dennis Clingerman, Staff Sgt. Jesse Miller and Sgt. Brad Baker. (Journal photo)