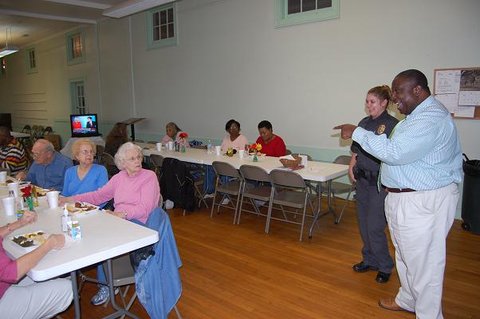 Williamston’s new police chief, Tony Taylor, has a vision for his department and for the town. Since taking over as head of the Williamston Police Department, Taylor has interviewed all of the department’s officers and re-hired those that he thought would best fit into his vision for the department.

Part of that vision is implementing a community based policing program, one that he feels will make the town safer and at the same time, accomplish a goal set down by the new mayor to make it a more “community friendly” police department.

“We want to make sure we have the right people in the position as police officers and to connect with the people,” Chief Taylor said.

Tony Taylor, 49, grew up in Williamston and graduated Palmetto High. He began his career in law enforcement as a dispatcher in Williamston and worked with the Greenville County Sheriff’s Office until 2007. He then went to the SC Criminal Justice Academy.

His career in law enforcement and criminal justice eventually brought him back to his hometown. With him comes experience and a direction for the local police department.

“It is an opportunity to come back and give back to the community,” he said.

Taylor said that he expressed an interest in bringing his experience to the office during an interview process that was underway prior to the new mayor taking office in January.

Williamston’s new mayor, Mack Durham, agreed that it would be “a good move” to have him head the department and when Durham officially took office, one of his first personnel changes was naming Taylor Chief of Police.

When changes are made in local government, and especially in a police department, it gets a lot of attention.

Taylor’s being named Chief of Police also had the additional attention of him being the first African-American to head a municipal police department in the county.

Taylor said that being the first African American to head a police department in Anderson County, “was an after thought.”

The Journal was recently invited to ride along with the new police chief and to hear some of the plans and policies that are being implemented in the department.

While riding through various areas of the town, Chief Taylor explained that he plans to bring the agency to a more professional position and bring a vision to it.

“We have some good officers,” he said. “But without a vision, we perish.”

Taylor said he has been “in the process of making sure we have the right people in the right place.”

He said he plans to set up a proper foundation and encourage a philosophy “of not being reactive, but being proactive and to partner with the community.”

“We want to be proactive in addressing issues with the help of the community,” he said. “This community is our community. It belongs to me.”

“Our goal is to get out two to three times a week, walking and talking with residents and meeting them.”

He said one of the responses he is getting from citizens is, “I’ve never seen that done before. “

“They can’t believe the chief of police is out walking in their neighborhood,” Chief Taylor said. “I tell our officers to get out and introduce themselves. We are there to serve the community.”

Getting officers out and into the community will play a big part in Taylor’s community policing initiative.

The concept has already reaped returns.

While investigating a string of auto break-ins in a certain area of the town, Chief Taylor joined his captains, officers, constables and reserves as they went out to canvass the surrounding neighborhood.

During the investigation, Taylor said his officers were walking the area and talking with neighbors of those whose vehicles had been broken into.

The Chief said they spotted a pocket book in a nearby wooded area and the recovered pocketbook contained items stolen from several of the cars along with important sentimental pictures that one victim thought was lost forever.

The next week a suspect was seen in a certain area and thought to have a gun. During a foot chase, the gun was apparently ditched somewhere along the path where the suspect had run.

In an effort to find the gun officers went back and searched the area the next day, eventually finding the missing firearm. (See related photo)

“We have some really good police officers,” Taylor said.

Chief Taylor said his community policing concept is also being supported by the town government. He has already ridden each of the town’s Wards with the councilman who represents each area.

“We want to work with the community and have everybody participate so we can be proactive,” he said.

Taylor said that dividing the town and assigning certain officers to certain Wards would be a big part of the community policing concept he is implementing.

“We are dividing up the community for officers, assigining them to a Ward, where they will attend community meetings, work with codes enforcement and be visible in the community.”

Former police chief Jay Grubbs, who has been brought back as a Captain under the new administration, will oversee the officers and their assignments in the community.

According to Taylor, officers will regularly go to public places and meetings where they will go in and talk to people who are there.

“We are the community”

While visiting the Caroline Community Center, chief Taylor was joined by Officer Simmons.

Taylor and Simmons talked with the group of about 15 seniors who were eating lunch. Everyone seemed glad to see them.

Ofc. Simmons said the response was very positive from everyone in the community she had spoken to.

Chief Taylor said one thing he has told his officers is “treat people like you want to be treated.”

He said that they have been instructed to “use common sense” when making traffic stops.

Officers are also being encouraged to walk and connect with the community and while doing that they learn the cut throughs and paths that people, and some time criminals, use.

Taylor said while he was out walking in a section of the town, many residents were surprised to see him. “People couldn’t believe the chief was walking in the commuity and talking with them.”

In addition to policy and personnel changes and involving town officials, Chief Taylor said he is planning a citizens’ academy to get interested persons in the community involved.

Chief Taylor said a good portion of the session is based on the police academy training and instruction he has done while at the State Criminal Justice Academy.

Participants will attend a class once each week over a six week period.

The class will walk the community through all areas of policing including liability and constitutional issues, the department budget, law enforcement and an officers role in the community. It will include scenario based training and go over what is involved in vehicle stops.

The Chief said there will be some scenarios presented in what to do or not do from a citizen’s standpoint and what goes into the decisions made by a professional law enforcement officer.

He said the experience will be “good for citizens and complement our proactive policies with practice.”

Other topics that will be covered include vehicle chases, when to call off a chase, search warrants and what a “Miranda” is.

“Sometimes people see things they don’t understand,” he said. “TV is so different from what it really is.”

Taylor said that the department is currently understaffed with 13 officers and four dispatchers. “We are understaffed for what we do,” he said.

He said that with only two officers on duty at night, there is a safety issue at times.

Another issue on the Chief’s mind is the recent shooting in a Connecticut school.

discussed the issue with him.

The department currently has one School Resource Officer (SRO) that divides time among three schools located in the town.

Chief Taylor pointed out that the most recent shooting involved a small school in a rural area much like Williamston.

“We pray that it won’t happen, but we have to be prepared,” he said. “We’ve got to be proactive.”

Taylor said he wants his department to be an open agency. “I want to have an open door and to work with the community,” he said.

Taylor said that he is available to the public anytime and offers his personal cell number for anyone who wants to or needs to reach him. The number is 864-905-3014.

He said he welcomes calls, not just when there is a problem.

“I want to know when an officer does something good,” he said. “We want to recognize our officers.

“This is also an aspect of community policing,” he said.

Taylor said his plan is a four year strategic plan and that he has a mission statement and a core belief system for the Williamston Police Department.

He said the job in Williamston is a dream job.