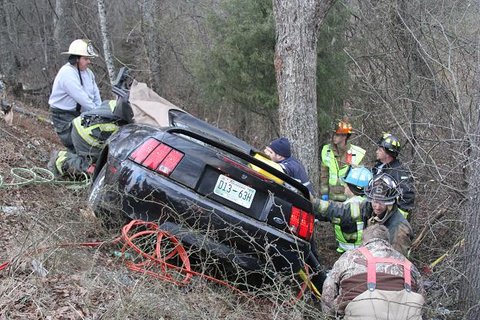 West Pelzer firefighters along with Williamston EMS personnel work to free two occupants of a Ford Mustang Friday afternoon. The car apparently went out of control as it crossed the Cherokee Road bridge over US Highway 29 Friday afternoon. It took rescuers approximately two hours to free the passenger and about forty-five minutes to free the driver from the wreckage. Both were transported to Greenville Memorial Hospital. Numerous accidents were reported on roads throughout the area and especially on I-85 between Anderson and Greenville. Sleet, freezing rain and rain were responsible for most of the accidents, officials said. (Photo by David Rogers)