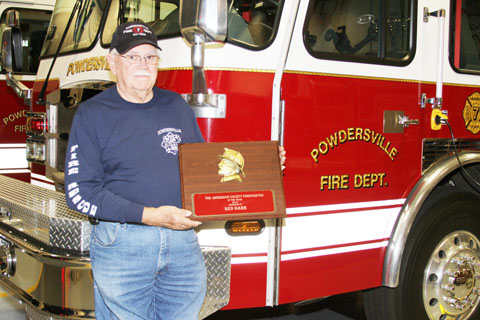 Powdersville firefighter Ken Barr was selected as the Anderson County Firefighter of the Year for 2012 at the annual fire chiefs banquet Monday night. Barr, who actually helped build the building that houses the Powdersville Fire Department, has been a member since its inception in 1964. Barr was caught off guard as he was named the recipient of the prestigious award.

A biography was read aloud and after listening to the majority of it Barr whispered to a fellow firefighter, “they are talking about me.” Barr started a family tradition in public service. He has two sons and two grandchildren who serve in the fire service and or EMS service. Powdersville Fire Chief Scott King said they plan to keep firefighter Barr around another forty something years.