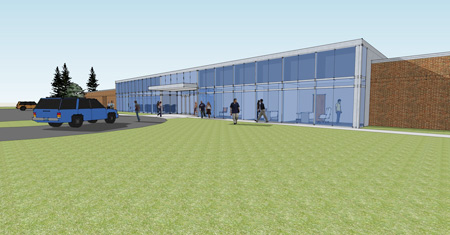 The Anderson Career and Technology Center, (ACTC) which serves Anderson School Districts One and Two has been undergoing a facelift with an addition to the front part of the existing building.

Craig Gaulden Davis was commissioned to design an addition to the front of the building to give the ACTC a more modern look and highlight the Project Lead The Way (PLTW) program.

The addition, built at a cost of approximately $1.3 million, is being constructed by Matrix Construction, of Anderson and is approaching completion, according to ACTC Director Dr. Jere Kirkley.

The 6200 square foot addition will be used in large part to house a new pilot science and engineering program, as well as upgrading the administrative offices that are some forty years old.

Dr. Kirkley said that the Center has done a fair job of making the original facility serve its purpose for several decades.

“This addition will not only make the Center more attractive, it will reflect the changes in science and technology education in the past decades,” Dr. Kirkley said. “It will also improve safety and security at the Center.”

The new addition, clad in curtain wall, will provide new administration space to allow the staff to work more efficiently and spotlight the traditional Graphic Arts program as well as the new PLTW program.

The new pilot program is not only a signal honor for the ACTC that recognizes its past achievements, but expands its promise of future ones as well.

Project Lead The Way (PLTW) is the nation’s leading non-profit provider of science, technology, engineering and math (STEM) curriculum and professional development to middle and high schools. The ACTC was chosen to pilot the new PLTW course for the 2013-2014 school year.

The course, called Computer Science and Software Engineering, or CSE, will be part of the Center’s Pathway to Engineering program. The course is intended to help prepare students to acquire the skills needed for meaningful employment in the future. U.S.Bureau of Labor Statistics figures indicate that half of the 2.8 million jobs available in STEM through 2018 will be for computer specialists.

ACTC is the only school in the state chosen for the pilot program, and one of only three in the Southeast. ACTC teacher Bryan Bacher will oversee the course. The program will be available for the full PLTW network in the following school year. The PLTW network currently includes some 4700 schools across the nation, with more than 5000 courses of instruction offered.

The PLTW labs are located near the front door of the school so visitors can view the inventive program and dispel the old stigma of vocational education.