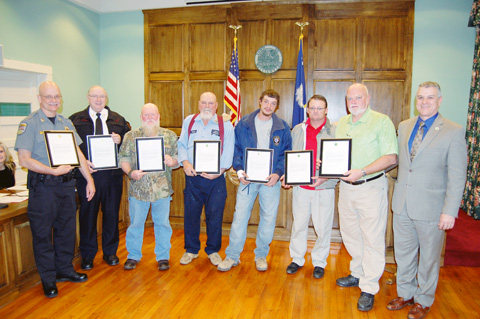 Williamston Town Council recognized outstanding service provided by members of the police, fire, water, sewer and street departments during recent events that occurred in the town.

Stolen property was recovered from a local pawn shop and the person who brought the items in was arrested after an investigation by Officer K. Winn.

Utilities Director David Rogers was presented a commodation for his actions during and for the way town employees responded during a major water main break.

The break occurred during a night of heavy rains and was located and repaired overnight.

The town received a letter from DHEC recognizing efforts of town employees under the direction of Rogers in implementing an emergency plan to ensure the town’s public water system was “safe and reliable.”

In the letter, Region 1 DHEC representative Connie Richardson stated that the town’s response was satisfactory in implementing the plan but “exceeded expectations” and that the town’s employees were well informed and should be commended.

Rogers said the response by the police, fire, water, sewer and street departments was instrumental in how the emergency was handled.

Rogers said that the town’s water supply dropped from 30 ft. to 15 ft. during a two hour period and the town “would have been dry” in another two hours if the break had not been located and repaired.

Town residents would have been without fire protection and safe water if that had happened, he said.

Mayor Durham said it was an “excellent team effort” during the emergency situation. “All our departments pulled together to locate this leak.”

Durham presented commendations on behalf of the town for their multi department response.