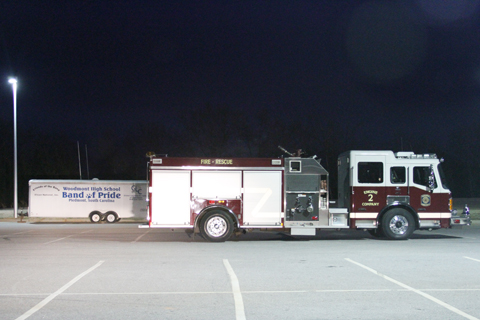 A South Greenville fire engine sits near Woodmont High School Wednesday evening as firefighters work to extinguish a rekindle of a woods fire near the school. On Wednesday, February 20 at 12:02 pm the Greenville County Sheriff’s Office received a call from an area resident regarding a brush fire near the intersection of Garrison Road and Reedy Fork Road in Pelzer. Two young white females were seen by the caller in the immediate area of the fire.

Deputies responded and were able to locate the females matching the description given by the caller near Woodmont High School. Upon seeing the deputies the females began to run which led to a brief foot pursuit. Deputies were able apprehend one of the females who is a 15-year old student of Woodmont High School. The second female, a 14-year old student of the high school, arrived soon after with her father to turn herself in.

While an investigation was being conducted at the school with the two suspects and deputies a second fire was reported at approximately 2:03 pm at a vacant home only a short distance from the first fire and behind the high school. According to the report the home was completely destroyed by the fire. Deputies were able to obtain documented evidence that the 14 and 15-year old students were responsible for setting both fires. Both suspects were arrested and taken to the juvenile detention facility located at the Greenville County Law Enforcement Center. The students have been charged with the following offenses: