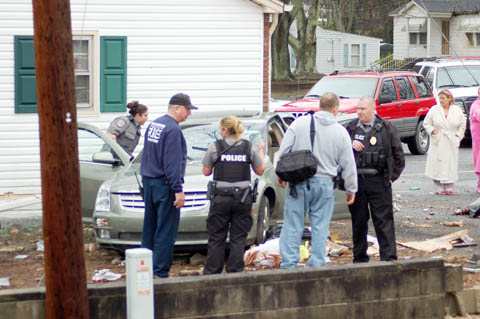 Updated 2/27/13 – A police chase from West Pelzer through Williamston Tuesday ended when the suspect lost control of his vehicle at a busy intersection and crashed into a building.

According to West Pelzer Police Chief M. D. Clardy, West Pelzer Sgt. J. W. Sparks received a call of a hit and run accident involving a 2005 Cadillac which was headed into West Pelzer. A witness who was in phone contact with Central Dispatch was following the vehicle. When Sgt. Sparks attempted a traffic stop on Hwy. 20 , the vehicle sped off toward Williamston. Sparks pursued the vehicle into Williamston.

Williamston Police Chief Tony Taylor said in addition to being followed by Sgt. Sparks, the vehicle was being pursued by the SC Highway Patrol and that a BOLO had been issued. According to reports, Williamston officers spotted the vehicle at the traffic light at Academy St. and Main. The vehicle made an abrupt left hand turn into the parking lot of Calvary Baptist Church and the driver lost control of the vehicle. The vehicle then traveled across McDonald Avenue and struck a building at 103 Belton Dr. The driver exited the vehicle and fled on foot before being apprehended a short distance later by Williamston officers Elioupoulous and Simmons. Two passengers in the vehicle were transported by EMS to Greenville Memorial Hospital for treatment of injuries sustained in the accident.

Bobby Bruce Rains, 836 Stewart Gin Road, Liberty was arrested on the scene by the SCHP. In addition to charges by the Highway Patrol, Rains is facing charges in Williamston for leaving the scene of an accident with personal injury and failure to report damage to a fixture adjacent to a highway. Rains is also facing charges of failure to stop for blue light by West Pelzer. Narcotics and other paraphernalia were located in the vehicle officials said. There are also expected to be additional charges in Greenville County. Car chase ends with