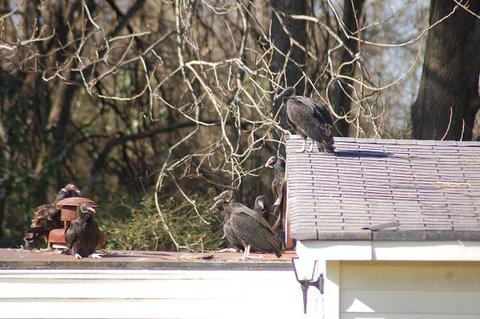 Buzzards, anywhere from 25 to 100 or more, have been drawing the attention of Williamston residents for about two weeks. The buzzards sit daily on the town’s water tower on Hamilton St. and surrounding trees and at times can be seen forming a vortex over the area in what has been described by witnesses as “hundreds”. As many as 25-50 were seen Friday morning perched on the collapsing roof of a house on Greenville Drive, causing several people to contact the Williamston Police Department. Two Williamston Police officers checked out the house and nearby property but did not find anything out of the ordinary or evidence of what could be attracting the buzzards.